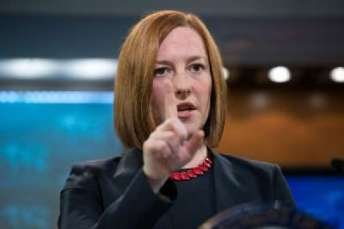 The State Department spokesman Jen Psaki at a briefing in Washington on Wednesday once again touched the fate of the arrested journalist Khadija Ismayilova.

"I don’t know that I have more information. I’m happy to reiterate. I don’t know if any of this is new because I haven’t spoken about this in a couple days, but let me reiterate and see where we are. We’re concerned – we’re very concerned by the arrest and pretrial detention of Azerbaijani journalist Khadija Ismayilova. We’re deeply troubled by increased restrictions on civil society activities, including on journalists, in Azerbaijan. We are increasingly concerned that the government is not living up to its international human rights commitments and obligations. We urge the Government of Azerbaijan to respect the universal rights of its citizens and allow them to freely express their views. Azerbaijan will be best able to ensure its future stability and prosperity by allowing a more open society. We have, of course, raised the increased restrictions on civil society and freedom of press at multiple levels in both Washington and abroad with the Government of Azerbaijan officials. I don’t have anything specific as it relates to this individual case,” Jen Psaki said.

State Department: US alarmed Leyla Yunus in detention without access to medical care