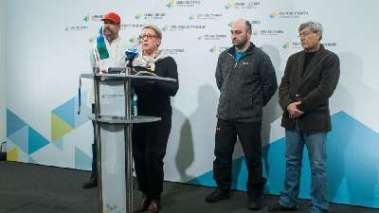 The Chechen people since the time of the Maydan support Ukrainians. Chechens were among the activists in the Maydan, and then went to the zone of ATO (anti-terrorism operation), to fight side by side with the Ukrainians. Chechens were among the "Cyborgs" in the Donetsk airport. This was told on Thursday by the co-founders of the Ukrainian-Chechen Friendship Society at a briefing in the Kiev crisis media center.

Chechens fight in three Ukrainian volunteer battalions. "We fully coordinate their actions with a staff of ATO, there is no initiative," said the cofounder of the society, Ahmed Alikhadjiyev.

The Chechens, who are fighting on the Ukrainian side, are about a hundred, but, according to Alikhadjiyev, if the Ukrainian side appeals, many Chechens are ready to come and defend the territorial integrity of Ukraine.

The briefing participants stressed that the Chechens will never fight against the Ukrainians, and they should not be confused with the so-called "Kadyrov's men".

"Kadyrov’s men are the power structures of the Russian Federation, in the person of different nationalities," said Alikhadjiyev.

Khagani Huseynli, chairman of the Congress of Azerbaijanis of Ukraine, said that the people of Azerbaijan have always been together with Ukraine. "Everything that is happening in our countries has the same roots. If we do not stop the negative processes here, then this will not be the end of that. The European states are beginning to understand this," he said.

Huseynli convinced that peoples of the former Soviet Union will not be heard alone, so they must act together for a common victory.

"The roots of all evil are in the Kremlin. All violent and dictatorial decisions come from there. And the victims of this violence are entire nations,” said the representative of the International League Maydan Vasily Lyubarets.