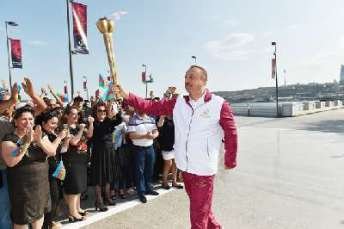 On Sunday in Baku there was held a ceremony associated with the torch of the European Games.

At about 18:00 the torch arrived on a yacht from the Oil Rocks into Baku Bay. On one of the piers of the seaside boulevard, which the authorities for whatever reason persistently call Sadko, the torch was handed over to President Ilham Aliyev.

To the applause of the crowd, Aliyev ran a couple of hundred meters and passed the torch to the participant of the Second World War Fatma Sattarova.

Further, the torch passed into the hands of various musical figures and all the family members of Ilham Aliyev.

So the torch circulated through the center of the capital, accompanied by a group of riders, security, and electric cars.

In conclusion, the torch was taken to the Maiden's Tower, where it will be kept until the Games open on 12 June.