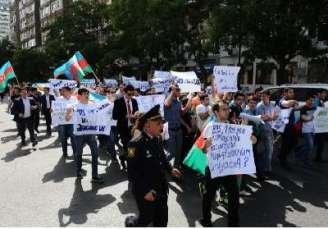 Several dozen members of pro-government youth organizations picketed the Landmark office complex on Khagani Street at 10:30, where the EU mission, the OSCE, the British Embassy and the Embassy of the United States are placed.

The protesters shouted slogans condemning the "double standards" of the West, demanded an end to "unreasonable" criticism of Azerbaijan in international forums. They shouted their demands and moved to the park Sahil, where they told the TV channels of their action.

One of the organizers named Fuad Rasul, in particular, accused "foreign forces that do not accept the success of Azerbaijan."

"These states and organizations do not want to see our progress or the Karabakh problem, so we are protesting," he said.

Police did not intervene in the action and no one was detained. Rather, police took care of the protesters.