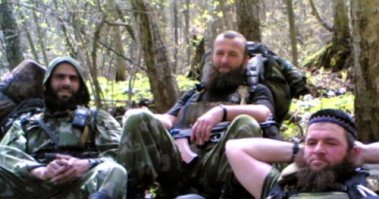 Aslan Byutukaev, the commander of the battalion of suicide bombers "Riyad al-Salikhiyn" has sworn to the leader of the "Islamic State" (IS), which is recognized to be a terrorist organization, on behalf of all the Chechen militants. He stated this in his audio appeal posted on the YouTube. Byutukaev is one of the leaders of "Imarat Kavkaz". According to investigators, in 2011 he was one of the organizers of the terror act in the Moscow "Domodedovo" Airport. In July 2012, the Investigating Committee of the Russian Federation (ICRF) announced the completion of the inquiry into the terror act in "Domodedovo". According to investigators, the act was organized by Doku Umarov, who commanded the Byutukaev grouping. As reported in March 2011, Byutukaev was killed during a special operation in Ingushetia; however, his death was not confirmed. In the opinion of law enforcers, Byutukaev was also involved in the attack of Chechen militants on Grozny in December 2014. On December 3, 2014, a video appeared on the YouTube posted on behalf of Chechen militants, in which one of them confirmed that the attack on Grozny was committed under a Byutukaev's order. Various sources, including the Russian FSB, have confirmed that militants from Russia are fighting for the "Islamic State", says the document prepared by the "Caucasian Knot": "Caucasians in the ranks of IS (ISIL)". On May 23 this year, an evidence appeared on the Web of the oath taken by the famous Salafi preacher Abu Khalid Nadir to the IS leader. According to the experts, interviewed by the "Caucasian Knot", the oath of Nadir Abu Khalid to the IS "is aimed at attracting new supporters to the IS in the Caucasus.