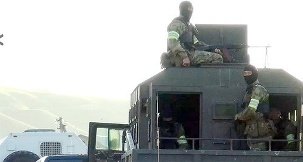 During the week from June 15 to June 21, 2015, at least three persons suffered from the armed conflict in Northern Caucasus; two of them were killed and one was seriously wounded. These are the results of the calculations run by the "Caucasian Knot" based on its own materials and information from other open sources. All the casualties are presumably civilians – one in Dagestan and one in Ingushetia. Attacks on civilians In the evening on June 17, in the outskirt of the village of Verkhni Djalgan, Derbent District of Dagestan, a local school teacher, who was haymaking dressed in military uniform, was shot dead. The killed Muradali Gadjiakhmedov was 43 years old. His parents could not reach him by phone and decided to look for him in the village outskirt. They found his body there with bullet wounds. Investigators are studying two versions of the incident: either militants mistook the teacher for a serviceman because of his camouflage uniform; or Gadjiakhmedov could recognize one of the militants; and they killed him as unwanted witness. On June 19, at about 12:00 a.m. Moscow time, on the Federal Highway "Kavkaz", in the area of the rural settlement of Troitskoe, Sunzha District of Ingushetia, unidentified persons who were travelling in a Lada Priora car, opened allegedly automatic fire at a Toyota Tundra car, driven by a 44-year-old resident of Troitskoe. The driver died on the spot; and his passenger – his fellow villager of the same age – was hospitalized with gunshot wounds to the SunzhaDistrictHospital. Doctors assess his condition as extremely grave. Detentions On June 16, inGrozny, during operative-search actions, a 23-year-old local resident was detained. During the interrogation, he confessed that in winter and summer of 2014 he rendered assistance to members of one of the illegal armed formations (IAFs) operating in the forested mountainous terrain in the south of the republic. The detainee bought foodstuffs for militants and brought them to a wooded area in the mountainous Shatoi District. On June 18, at about 6:00 a.m., law enforcers in masks conducted a search of the household of Eduard Abazov, a resident of the village of Dugulubgei, Baksan District of Kabardino-Balkaria. All the residents were driven out; power agents in masks entered the house with the owner's younger son named Akhmed Abazov. There were no invited witnesses of the search. While inspecting the house, power agents found a grenade, a pistol and a full magazine to a submachine gun. Eduard Abazov is sure that the ammunition was planted into his house by the power agents. After the search, they took away the twenty-two-year old Akhmed Abazov to some unknown place. According to his father, this attempt of pressure on him has to do with the fact that he insisted on the investigation into the causes of death of his elder son Murat. Murat Abazov, the brother of the detained Akhmed, perished on October 18, 2013, at an explosion of a bomb in the yard of a mosque in Dugulubgei. According to the police, Murat Abazov and Murat Tishkov, who also dies in the explosion, were carrying the bomb intending to commit a terror act. On June 18, Ingush policemen detained two residents of the village of Ali-Yurt, Nazran District of Ingushetia, in whose houses workshops were organized for making military firearms. The underground production shops were revealed as a result of two searches, conducted in the village. The policemen confiscated dozens of various ammunition rounds, several firearms, components and parts to pistols, rifles and submachine guns, as well as tools and equipment for processing metals. On June 19, inMakhachkala, power agents detained Fatima Kurbanova, the widow of a member of the armed underground. She was detained in the morning on her way to work, said Madina, a resident of Makhachkala. Fatima is earning her living by tutoring; and she was to come to Madina's children. After her detention, Kurbanova managed to contact Madina using WhatsApp and reported that she had been delivered to the police station. Later, her phone was already off. Fatima is a practicing Muslim; she is a widow of a killed militant. Akhmed Manasov, Fatima's husband, and Albert Kurbanov, her brother, were killed in 2009 during a special operation. Law enforcers brought Fatima Kurbanova to the Kirovsky ROVD (District Interior Division) of Makhachkala together with her sister-in-law Natalia Lessovaya, the widow of Fatima's brother. In the evening on June 19, Kurbanova was released. She associates the law enforcers' actions with the killing of her husband in 2009.