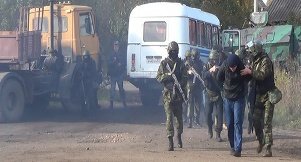 During the week of March 7-13, 2016, six persons fell victim to the armed conflict in Northern Caucasus. Of them, two persons were killed, and four others were wounded. These are the results of the calculations run by the "Caucasian Knot" based on its own materials and information from other open sources.

At 4:00 a.m. Moscow time of March 11, the counterterrorist operation (CTO) legal regime was introduced within the whole territory of the Botlikh and Khunzakh Districts of Dagestan. In the course of the CTO legal regime in the Khunzakh District of Dagestan, law enforcersorganized inspections of private houses in the village of Orota. A large number of military vehicles entered the village, and local kindergarten and school were closed. On the same day, a group of militants was discovered on the outskirts of the village. When law enforcers tried to detain them, the militants opened fire from automatic firearms. After that, the criminals tried to escape in a nearby wooded area. Two militants were killed by return fire. No civilians or law enforces suffered. The men killed in the shootout have been preliminary identified as Magomed Gadjimagomedov and Sabir Rashidov. According to investigators, Magomed Gadjimagomedov was wanted for the murder of Omar Anasov, a resident of the village of Gotsatl of the Khunzakh District, committed in 2014, involvement in an illegal armed formation (IAF), and illicit arms trafficking. The CTO legal regime in the Khunzakh District was lifted at 8:30 p.m. Moscow time of March 12.

At about 2:00 p.m. of March 11, immediately after the Friday prayer, a car was blown up in the territory of the mosque in the municipality of Nasyr-Kort in Nazran. Eyewitnesses associate the explosion with an attempt on Khamzat Chumakov, the Imam of the mosque. According to them the car with a bomb inside detonated when it was approached by an off-roader with Khamzat Chumakov. As a result of the explosion, several persons were injured and hospitalized, including 50-year-old Israil Mutsulgov, 24-year-old Khamzat Barakhoev, 41-year-old I. Bakinkhoev, and 19-year-old I. Aliev. The bomb was planted inside a passenger car, and it had power of 10 kg of TNT equivalent. The nature of damage allows suggesting that the bomb was packed with additional striking elements. The car inside which the explosion occurred has been almost completely destroyed. The Imam himself was almost not injured; he got only bruises and abrasions.

On March 9, the Ministry of Internal Affairs (MIA) for the North-Caucasian Federal District (NCFD) reported that residents of three Dagestani villages were detained after law enforcers had discovered ammunitions with them. In Derbent, during investigative and search activities, policemen detained a 23-year-old local resident. In the course of the personal search of the young man, the policemen found and seized a grenade and rounds for a submachine gun. In the Untsukul District of Dagestan, policemen detained a 28-year-old local resident, who drove a VAZ-217030 car. During the search of the car, the policemen found and also seized a grenade with a fuse and dozens of rounds of different calibres. Later, policemen discovered a TNT block, religious books, and more than 20 rounds of ammunition for automatic firearms inside the house of a 40-year-old resident of the Derbent District of Dagestan.