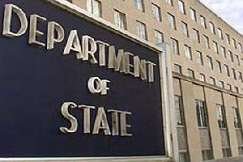 The US State Department published the traditional annual report on the state of human rights in the world.

The report noted that with the support of Armenia the separatists still control the Nagorno-Karabakh region and seven surrounding districts. As a result, there remains the problem of 622 thousand displaced persons.

At the same time, the most significant problems in the field of human rights during the year included strengthening government restrictions on freedom of expression, assembly and association. This was expressed in harassment, imprisonment, dubious charges and the use of force against human rights defenders, civil society activists and journalists. The government used the legislation, pressure, and other measures to further narrow the space for activists and NGOs.

Other problems in the area of human rights were physical violence in the army, torture or other abuses in prison and life-threatening conditions of detention, as well as arrest without a warrant.

The authorities are often unable to provide due process in relation to property rights, resulting in forced evictions, demolition of buildings on dubious grounds, and insufficient compensation for the property.

There were reports of continuing arbitrary government invasion of privacy and the arrests of religious leaders. The government restricted freedom of movement of civil society representatives.

Restrictions for political participation have remained. Allegations of widespread corruption at all levels of government have continued, although some government agencies have taken steps to reduce petty corruption at the local level.

There were continued reports of official obstacles to the registration of NGOs in the field of human rights.

The government has not taken steps to prosecute or punish officials who committed human rights violations.

Reports have shown that most abuse occurred when the detainees were in police custody.

The human rights activist Leyla Yunus said the authorities threatened her and her husband with rape before their arrest.

After the arrest of Leyla Yunus she reported pressure, beating and moral terror by the administration and a police agent.

Ill-treatment in custody took place in relation to seven members of the youth movement NIDA, the human rights defender Intigam Aliyev and other activists.

Local sources have reported poor conditions in prisons, with unsanitary conditions, poor air tightness, and poor medical care. Authorities often did not allow for the transfer of Leyla Yunus, including necessary medication for her.

They limited her access to lawyers, and some of them were deprived of the right to defend Leyla Yunus.

The courts are corrupt and dependent on the executive. Many sentences for political activists were legally unfounded and unsubstantiated.

The government claims that there are no political prisoners. However, local and international NGOs call their number from 24 to 135 people.

The authorities ignore the decisions of the European Court of Human Rights on the release of such persons, such as the leader of REAL Movement Ilgar Mamedov.

The country has 12 journalists and bloggers sitting in prison.

The Head of the Presidential Administration Ramiz Mehdiyev accused the office of Radio Liberty in Baku of subversive activities and then the police raided the office, taking all the documents and computers and questioning the editorial staff for many days.

Ramiz Mehdiyev accused journalists, including Ismayilova, of anti-state activities, and then she was arrested.

A similar fate befell the Institute of Reporters Freedom and Safety and its head Emin Huseynov, who was forced into hiding.

The government forced the Media Rights Institute to close down.

Local observers reported 64 physical attacks on journalists during the year. In Nakhchivan on August 21, Turan’s correspondent and a member of the Resource Center for Democracy Ilgar Nasibov was brutally beaten, and in Baku while covering the rally of students the correspondent of the Voice of America Taptig Farhadoglu was subjected to violence.

The total amount of fines against newspapers and journalists was 255,000 manats.

The majority of independent and opposition newspapers are in a critical financial situation. Because of that the leading Russian-language newspaper Zerkalo has ceased publication, and the main opposition paper Azadlig seriously suffers from a lack of finance.

The government forbids businesses to advertise in opposition media and has deprived them of the possibility of getting grants from foreign donors.

The report also refers to the violation of the freedoms of belief, movement, and so forth.