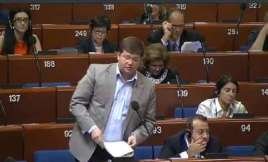 On June 23 in Strasbourg the PACE session the rapporteurs of the Monitoring Committee reported on the functioning of democratic institutions in Azerbaijan.
The report gives estimates of Azerbaijan's fulfillment of its obligations to the Council of Europe, the state of the judicial system in the country and the electoral problems in the light of the upcoming parliamentary elections in November.The document states that the previous recommendations of the Venice Commission on the reform of the electoral legislation were ignored by the national authorities.The report finds evidence of the country's non-compliance with the freedom of expression and assembly, and the dependence of the judiciary on the executive authorities."The Monitoring Committee expresses grave concern about the deteriorating human rights situation and the lack of opportunities for the activities of independent NGOs and human rights defenders, and persecution of independent media."The document also calls for the government to "put an end to the systematic harassment and suppression of critics of the government."The report also highlights the need for all previous recommendations and decisions of the European Court of Human Rights and the Committee of Ministers of the Council of Europe to provide a real separation of powers, freedom of expression and assembly in the country.During the discussions, MPs harshly criticized the official Baku for the demonstrative disregard of the values and priorities of the Council of Europe.Numerous desperate attempts of the head of the Azerbaijani delegation Samad Seyidov to break the adoption of strict amendments to the report and vice versa - to soften the harsh assessments - were to no avail.The speakers declared inadmissible to make endless references to the Karabakh conflict to justify violations of human rights in Baku.The Head of the Monitoring Committee Sheneh noted that the rapporteurs were subjected to serious pressure during the writing of the report. The essence of the report is that in Azerbaijan there should be pluralism and freedom of expression and independent judiciary.The resolution of the report contains clear demands to the authorities of Azerbaijan to release political prisoners and end repression in the country. They are also required to cancel the reactionary legislation to create the due conditions for civil society and to ensure the freedom of speech. In addition, the report indicates the names of political prisoners, whom the authorities have to release immediately.