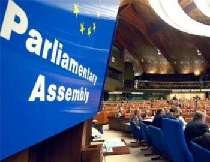 The agenda of the PACE summer session, which will be held June 22-26 in Strasbourg, including the draft resolution: "The functioning of democratic institutions in Azerbaijan".   The document was prepared on the basis of the report of the co-rapporteurs of the PACE Monitoring Committee Pedro Agramunt (Spain) and Tadeusz Iwinski, which was approved on June 1 meeting in Paris this structure.

PACE Monitoring Committee endorsed the recommendations included in the report of the Azerbaijani authorities concerning separation of powers, to ensure a fair electoral laws, improving the independence of the judiciary, and an end to the suppression of human rights in the country.

The report, in particular, reflected the imbalance in the system of separation of powers

in favor of the executive power, the lack of independence and impartiality of the election administration, restrictions on NGO activities, prosecution of known civil society activists and journalists, implementation of decisions of the European Court of Human Rights, in particular, in the case of Ilgar Mamedov , the leader of the movement "Republican Alternative” (ReAl.)

In conclusion, the document put forward a number of specific recommendations to address the existing problems.  In particular, it is proposed to provide the actual enshrined in the Constitution, separation of powers, strengthen parliamentary control over the executive.

It is also recommended to ensure full independence of the judiciary from the executive.

It is proposed to ensure the independence of the judiciary and to protect judges from outside influences. At the same time, it is necessary to amend the legislation on the powers of the Judicial-Legal Council (JLC) in the appointment of judges.

Now  the JLC headed by the Minister of Justice is formed from representatives of the executive, legislative and judicial powers.  It is proposed to form the Union of Right Forces, or entirely of judges, a majority of the judges.

Regarding the electoral system,proposals to strengthen the independence, transparency of procedures, simplifying the process of registration of candidates were put forward.

The need to promote an atmosphere of pluralism, free media access for all participants of elections and freedom of the press in the upcoming November 2015 parliamentary elections was noted.

It is also recommended to refrain from any kind of pressure on lawyers defending representatives of NGOs and journalists;

It is proposed to revise legislation  in the recommendations concerning the NGOs  taking into account the recommendations of the Venice Commission, to create a favorable environment for the activities of NGOs, including those who criticize  the authorities.