The Armenian-Russian relations: an electric-shock test 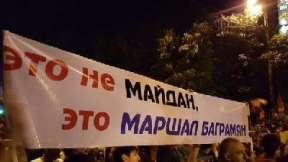 "Electric Revolution" in the Baghramyan Avenue in Yerevan has demonstrated the increased gap between the supporters of the European and Russian way of development. The situation has shown how far the selection of pro-Western model of society progressed after the collapse of the signing of the Association Agreement between Armenia and the European Union in November 2013.

Then the  president Sargsyan, symbolizing the Armenian nation, and  humiliated by the  Head of the Kremlin, arrived in Moscow and  hastily  read  with stammered voice  the text  of renunciation from European integration and the return of the prodigal son to Eurasian family under the dominant of Moscow. Then thousands of shocked Armenians did not go to streets, but the theme of the choice of the historical perspective became the subject of a fault in almost every Armenian family, which was standing on the threshold of choosing between "historic brother" and values.

The Armenian society underwent second humiliation in January 2015, when Russian law enforcement officers took under  their control the case of the brutal murder of Armenian family in the village of Gumri by the Russian soldier Permiakov. Russia refused to judge him according to local laws. Unlike a failed European integration the case of Permiakov took to streets protesting people who did not hide their anti-Russian sentiment.

The fact that the electric protests  have covered provincial regions of Armenia indicates the presence of serious discontent with the authorities, which is associated as a Russian puppet, and shows how widespread is the understanding of the need to change the foreign policy vectors.

Of course, it is unlikely that the  rallies in Baghramyan Avenue in the operational plan will lead to the same consequences as the protests in the Grushevsky Street in Kiev. In contrast to the Ukrainian President Yanukovich, Sargsyan fairly quickly abandoned the forced dialogue with the rebels.

The fact that the Armenian authorities have not crossed the line of violence, what they used to do, and made only one step during  the beginning of the  electric protests means that  Sargsyan's team is aware of the explosive mood  of opposition,  which in contrast to previous years, is ready to more radical actions. Moscow’s help  to Yerevan after protests to maintain the defense and offset the costs of growth of tariffs for electricity was perceived in Armenia as a retreat  of Russia before the next danger  of "color revolution." However,  the ongoing protests  may indicate that the Armenian society  is convinced of the correctness of a choice of tactics of protest.

e not spontaneous and random even for the reason that Armenia, both before  and after independence hoped on  joining the orbit of Western values. The  idea of age-old relationship with Russia having no alternative, and  imposed by Moscow, began to break down after the resettlement of returnees from the Middle East after World War II, and even more, after the Soviet collapse and the destruction of the Iron Curtain. Expanded contacts with Western Diaspora  were changing rapidly the looks at the historical past and the attitude to Russia. The only limiting factor in Armenia remained  the post-Russian political and economic dependence, the Karabakh conflict, the mythical Turkish threat, fed by tragedy in 1915. However, on the eve of the protests on the Baghramyan Avenue in Yerevan, the economic collapse in Russia spread to Armenia, the Karabakh conflict has turned the country into a hostage of the frozen conflicts, and the failure of the Zurich Armenian-Turkish agreement signed in 2009did not allow to  unlock the Turkish direction.

In this case interesting is the question of further actions of Russia, Azerbaijan’s and Turkey's reaction to the events in  Armenia weakened by the crisis.

Russia. From the  rapid response of the Kremlin, it becomes clear that Russia will take feasible steps to support economic satellite, speculate on the Karabakh issue, and moreover, threaten the ability to support Azerbaijan in the conflict, increase the psychological impact on the Armenian society through the theme of destabilizing plans of the West, and even Turkey, and finally, to put pressure on the Armenian Diaspora in Russia.

Azerbaijan. The reports of the Azerbaijani  TV channels, initially neutral, but  then in the Russian interpretation, showed that Baku is also under pressure from Moscow, and will express  the attitude to the events in Armenia along  with the Kremlin. But this does not mean,  that even hypothetically, Azerbaijan can  launch an operation to liberate Karabakh with the connivance of Moscow. Western dependence, not only energy, will hamper any large-scale actions. In addition, Azerbaijan is not interested in Armenia’s  consolidation with Russia.

Turkey. Ankara, which is interested in normalization of relations with Yerevan,  is discreetly watching the events taking place in the Baghramyan Avenue. Turkey will continue to adhere to the current relations with Armenia, understanding well in which direction the processes develop in the Armenian society.

Under such situation, it is unlikely that the events in Armenia will lead to a change of government, but it becomes clear that they will strengthen Armenia’s distancing  from Russia, which is covered by the next wave of permanent crisis.