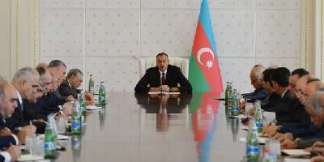 President Ilham Aliyev once again hit with an angry tirade at the European structures, speaking at a meeting of the Cabinet on Monday.

"The spiritual and economic crises have already become a reality in Europe, which makes us think, and we must think about how Azerbaijan should integrate into European structures. In general, should we get integrated or not? Personally, I have some time been thinking about it and I think that in the coming months it is necessary to prepare a new mechanism, format and concept of cooperation," he said.

"Azerbaijan has not joined the Association Agreement with the European Union, because it is not in our interests."

This agreement does not imply equal cooperation, but only contain a "list of instructions." "It does not fit, as Azerbaijan is establishing equal relations with all countries and organizations," Aliyev said.

"It may be a strategic partnership agreement, or simply a cooperation agreement or partnership. But it should provide equal rights and national interests of Azerbaijan," Aliyev further expressed doubts about the feasibility of European integration.

"Sometimes I hear from government officials, MPs and public figures that we should integrate into Europe. Just think when you talk about it. First, you must know the position of the President. Secondly, what is the form in which you will integrate? Do you need this integration or not? In what capacity do they want to take Azerbaijan there - as a secondary member, associate member, or something else? We do not need such a format," said Aliyev.

He further noted that the accession of Azerbaijan to the Council of Europe did not meet expectations.

"How much can they insult and humiliate Azerbaijan? Our patience is full. We are perfectly able to live without the Council of Europe. We lived up to 2001, when there was a civil war, the Armenian occupation, the political crisis, the economic downturn. We lived and did not die.

We joined them to have the Karabakh problem solved. The question was this. We knew that Armenia was eager to join the Council of Europe. We also wanted to be there to have the matter resolved fairly. But what we saw there was injustice, double standards, Islam phobia, envy, and ill attitude," Aliyev said.

He expressed his dissatisfaction with the latest PACE resolution on Azerbaijan adopted during the European Games.

"The text of the resolution proposed by the rapporteurs stated "the Assembly considers that Azerbaijani lands are under occupation.” They changed the draft and wrote: "the Assembly takes into account the existence of the Nagorno-Karabakh conflict.” What does it mean?! This is an outright anti-Azerbaijani position. Therefore, once again I return to the topic. We are not integrating, that's enough. If necessary, we will join another union, but as an equal partner, as a decent country," Aliyev said.

Policy is the same, but in the context of parliamentary elections