Policy is the same, but in the context of parliamentary elections 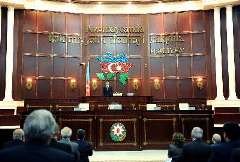 On 15 July  the President Ilham Aliyev held government meeting devoted to the first half of the socio-economic development, and outlined his  position on foreign and domestic policy. Analysis of his speech, including theses, arguments and examples taken out of context, show that economic crisis that started at the beginning of the year  could not shake the position of the president in relation to the policy pursued by him since the first presidential election in 2003.

The President Ilham Aliyev  continued to see Azerbaijan during the past six months as  an island of stability  surrounded by war in the Middle East, the crisis in Europe and the CIS.

The words of the president mean that he will retain the policy of maximum delay in the process of Azerbaijan's integration into Europe. "We do not integrate. We have integrated and that is enough. If  necessary, we will  join other unions, as an equal partner, and  as a decent country," he said.

Aliyev sees in Europe "injustice, double standards, Islamophobia, envy, and ill-will." The theme of the external enemy encirclement, plots against Azerbaijan, hostile pro-Armenian forces in the West, the fifth column in Azerbaijan remains in the arsenal of Aliyev’s policy, who used it in his speech.

From Aliyev’s speech comes the conclusion that he will pursue a policy of protracted European integration. Despite the criticism of the democratic Europe, President Ilham Aliyev does not plan to curtail relations, and speaks about the necessity to prepare in the coming months a new mechanism, the format and concept of cooperation. Aliyev called the agreement on associate membership unacceptable unilateral cooperation, prescribing instructions to Azerbaijan. According to Aliyev, the new document of collaboration, which may be a contract of partnership or strategic partnership should take into account national interests and values of A

zerbaijan, which is concerned about the economic and moral crisis in Europe.

In the economic sphere hopes for reform have also been  pushed for an indefinite period. Aliyev did not put forward any radical plans to liberalize the economy, flaunting "successful economic results," GDP growth - 5.7%, non-oil sector - 9.2%,  inflation - 3.5%,  cash income - by 6.2%. (How such growth was achieved  if in the first half of this year GDP amounted to $25.06 billion, and  over  the same period in 2014 - $36.7 billion. –Turan.)

He made it clear that an emphasis will be placed on strict government regulation and the personal intervention of the president in business affairs. At that meeting Aliyev instructed to low prices for airline tickets, medicines, hotel rooms, etc. He once again repeated inadmissibility of unfounded checking business entities,  the number of which becomes more and more every year; and the tax burden on them once again intensified after the devaluation of the manat in February.

The same programs and concepts with the change of stages remain  in the social and infrastructural development and agriculture, but without the ultimate goal. The meeting discussed the improvement of water supply and sanitation, as if there was  not a program of drinking water supply and sanitation of Baku settlements by the end of 2013 or its continuation until 2016, which also will fail; there were talks about the growth of grain production instead – from 20 quintals per hectare to 30 quintals per  hectares, but nothing  was told about the  complete dependence on imports of breadstuffs and food security programs.

Thus, the opening and closing of the president's speech and detached views of the government  members  mean that Ilham Aliyev, as before, will act  in accordance with the with the requirements of the moment, will take decisions on the localization mini-crisis and challenges, but will not take strategic decisions in the foreign or internal policies. Both spheres in the near future will be directly related to the upcoming parliamentary elections in November, preparation and conducting of which will determine the agenda of the president.