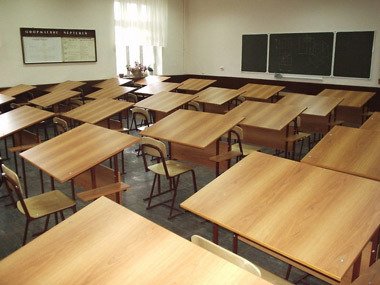 Pre-election agitation and propaganda campaign in Azerbaijan is at schools now. Students in Baku, Sumgait and in other regions of the country are distributed booklets of Ilham Aliyev’s presidential activity from 2003 to 2013, the Azerbaijani news agency "Turan" writes.

The article reports that the booklets are published at a high polygraphic level by the Ministry of Economic Development of Azerbaijan.

Nothing is reported about the print run and publishing house, however, there has been no less than 100 thousand copies, as far as all the students from first grade up to 11th had received the booklets.

As noted in the article, the oppositionist party of National Council of Democratic Forces considers the distribution of booklets at schools as a mass election campaign for the incumbent President of Azerbaijan held at the expense of the government.

"Naturally children will bring the booklets home as publications of electoral propaganda for older family members who are the potential voters," said Mehman Aliyev the head of Commission for Public Relations of the National Council.

The article notes that the booklets that are issued under the title "2003-2013: Objectives, Development, Results" present documents about the country's ongoing state programs of socio-economic development. The content of the booklets is too politicized and the results obtained are attributed solely to the activities of Ilham Aliyev. For example, the brochure released in Sumgait consists of 146 pages and the name of the current president is repeated 31 times. His photos are depicted on 35 pages.

As the author writes, the brochure in figures reflects the socio- economic achievements in Sumgait. It presents dubious statistics about new jobs opened in the country. Thus it says that for the last 10 years was opened 47,716 new jobs, of which 31 036 - permanent. However, according to the State Statistics Committee of Azerbaijan, in 2005-2011 the number of employees of construction companies in the city dropped from 1794 to 1039, industrial enterprises - from 16 399 to 13 733. Over the years indicated in Sumgait suspended operations 19 industrial enterprises.

The presidential elections are scheduled in Azerbaijan on 9 October 2013. The previous presidential elections were held on 15 October 2008. The current president Ilham Aliyev is on this position for two terms already - since 2003. In March 2009 a referendum on making amendments to the Constitution was held in Azerbaijan, which repealed the restriction on one person remaining in office for more than two consecutive terms. The Venice Commission of the Council of Europe stated in this regard, "Giving one person the right to be repeatedly elected to the presidency is seen as a step backwards in the development of democracy."