On September 28-October 4, one person killed in armed conflict in Northern Caucasus 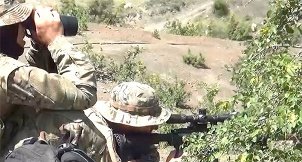 During the week of September 28-October 4, 2015, one person was killed in the armed conflict in Northern Caucasus. No wounded were reported. These are the results of the calculations run by the "Caucasian Knot" based on its own materials and information from other open sources.

The deceased person was a civilian, the head of Karamakhi village of the Buynaksk District of Dagestan.

At 0:00 a.m. Moscow time of September 28, a regime of counterterrorist operation (CTO) was introduced in the territories of the Kurakh, Magaramkent, Suleiman-Stalsky, Tabasaran, and Khiv Districts of Dagestan. Earlier, it has been reported that on September 18 and 19, law enforcers found the bodies of five killed local residents in the forests of the Suleiman-Stalsky District, and a summer militants' camp was discovered not far from the place of the murder. Law enforcers are searching for the militants, who killed the hunters. According to the law enforcers, the crime was committed by members of the "Suleiman-Stalsky" grouping. The search for militants is being held outside residential settlements and does not interfere with the lives of civilians.

At about 9:30 p.m. Moscow time of September 30, five armed men in masks kidnapped and killed Migitin Djavadov, the head of the village of Karamakhi of the Buynaksk District of Dagestan. They cut off the supply of electricity to the house of Migitin Djavadov. When the owner went out, they captured him and forced him into the house. The unidentified attackers did not introduce themselves; however, according to local residents, they claimed that "militants were hiding at his house." Then, the attackers forced Migitin Djavadov into his car and drove him away to some unknown destination. On the other day, the Migitin Djavadov's car was found in the Karabudakhkent District. The body of Migitin Djavadov himself was found in a wooded area.

On October 2, in Makhachkala, law enforcers carried out mass detentions of young people after the prayer in the mosque, located in the area of the Makhachkala garden and dacha community "Palmyra". The detainees were taken away in two buses. In total, about 60 people were brought to the police station. After the mosque-goers had been brought to the police station, all of them were registered at the policeand then released.