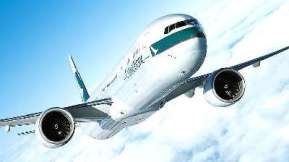 Hong Kong's leading airline Cathay Pacific suspended flights over Iran and the Caspian Sea. The company's management is afraid that the Russian missile striking on targets in Syria could pose a threat to passenger aircraft in the region.

"Due to the situation in the region, Cathay Pacific has suspended all flights over Iran and the Caspian Sea since last Thursday until further notice," the statement said. Earlier, Hong Kong Airlines already changed a number of routes to fly around the territory of Iraq, Afghanistan, Ukraine and Syria.

Last week, EASA published a report that the rockets fired in the direction of Syria crossed the territory of Iran and Iraq, flying below the routes of civilian aircraft used by commercial airlines.

Earlier on Wednesday, the Australian carrier Qantas said it decided to suspend flights over the Caspian Sea.

Apparently, similar warnings were also received by the Azerbaijani side that is closest to the scene. However, official Baku and especially state-owned AZAL do not say a single word about the situation. Judging by the advertising map, AZAL implements a number of flights over the area, in which missiles were launched. However, the authorities did not consider it necessary to comment on the situation and explain to their citizens that the missile launches were (or not) agreed with Baku and that the safety of civilian aircraft, etc. is taken into account.