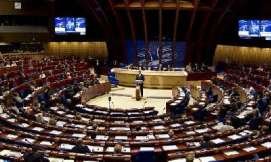 In a draft resolution approved today, the Political Affairs Committee of the Parliamentary Assembly of the Council of Europe (PACE) has called for "the withdrawal of Armenian armed forces and other irregular armed forces from Nagorno-Karabakh and the other occupied territories of Azerbaijan, and the establishment of full sovereignty of Azerbaijan in these territories", in the framework of the OSCE Minsk process.

The committee also called for "the convening of a plenary meeting of the Minsk Group to establish an interim status for Nagorno-Karabakh guaranteeing security and internal self-governance, with an agreed corridor linking Armenia to Nagorno-Karabakh, and other confidence-building measures, including an access corridor to Nakhchivan".

Strongly condemning the deliberate targeting of civilian settlements close to the line of contact, the committee said it regretted that the Nagorno-Karabakh problem has been side-lined by other major international crises. "Further procrastination only complicates the settlement of this 'un-frozen' conflict which has claimed over a hundred human lives since the beginning of 2014, and which may escalate into a real war between two Council of Europe member States", it added.

Recalling that both Armenia and Azerbaijan committed themselves, when joining the Council of Europe in 2001, to use only peaceful means for settling their conflict over the Nagorno-Karabakh region, the committee urged both governments to refrain from using armed force.

The committee also called for the establishment by the OSCE of an international peacekeeping force to maintain security within Nagorno-Karabakh and the other occupied territories and to ensure the safe return and resettlement of displaced persons, as well as the creation of a mechanism to investigate ceasefire violations.

The draft resolution, based on a report by Robert Walter (United Kingdom, EC), is due to be debated by the Assembly at its January 2016 session.