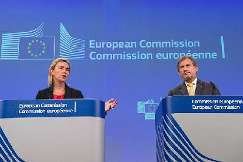 Through its European Neighbourhood Policy (ENP), the EU works with its southern and eastern neighbours to achieve the closest possible political association and the greatest possible degree of economic integration. The policy helps the EU to support and foster stability, security and prosperity.

The ENP was launched in 2004, to help the EU support and foster stability, security and prosperity in the countries closest to its borders. The EU remains committed to these goals, but events of recent years have demonstrated the need for a new approach, a re-prioritisation and an introduction of new ways of working.

The EU carried out a review of the policy including public consultation from March to July 2015 with partner countries, international organisations, social partners, civil society and academia. More than 250 contributions were received.

On 18 November 2015, the High Representative for Foreign Affairs and Security Policy and the European Commission presented the main lines of the review of the ENP, spelling out the Union's new approach to its eastern and southern neighbours.

"We should switch from the idea that the European Union is at the centre, surrounded by the neighbouring countries, to the idea of a new partnership based on cooperation", said Mogherini. "A stronger partnership with our neighbours is key for the European Union, while we face many challenges within our borders and beyond," Mogherini added. "We are confronted with threats that are global and have to be tackled by the international community in a united way. We have to build together a safer environment, try to solve the many crises of our common region, support the development and the growth of the poorest areas, and address the root causes of migration."

Mogherini singled out the five pillars of the work that has started: "First, focus on economic development and job creation; second, cooperation on energy; third, security; fourth, migration; fifth, neighbours of the neighbours". The measures set out today, underlined Mogherini, "seek to find ways to strengthen together the resilience of our and our partners' societies, and our ability to effectively work together on our common purposes".

In the reviewed ENP the EU will focus on areas that matter most. The stabilisation of the region, in political, economic, and security related terms, will be at the heart of the new policy. The EU's own stability is built on democracy, human rights and the rule of law and we will continue to make the case for these universal values.

Mogherini: Human rights are always a key topic of our discussions