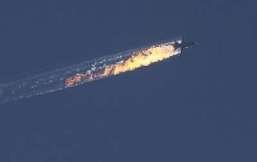 It is difficult to assess definitely  the destruction of the Russian Su-24 at the Turkish-Russian border, however Ankara's  strong position on this issue is not in doubt. This is the general opinion of most experts and politicians in Azerbaijan.

"Russia has long been behaving provocatively and  for many months there are reports on violations by  the Russian Air Force  the air borders of the UK, the Baltic countries, the United States and other Western countries. There is an  impression that  Moscow  does not want anyone to contact her and all is permitted. Therefore, it was to show the Kremlin  its  place," said Arastun Orujlu,  the head of the "East-West" Center.

However, to predict the consequences of what happened is difficult. Although there is no doubt that Turkey has acted clearly and thoughtfully, showing that it does not intend to tolerate the actions of Russia on its border  aimed at support  of Assad regime and the suppression of opposition forces, under the pretext of LIH.

Being asked how much can aggravate bilateral relations Orujlu  believes that the parties will  not pass the red line. "The loud statements and threats will not lead to a complete freezing  relations.

The main driving factor for Moscow is the desire to show everyone that it is a world power, which alone can solve problems around the world, and no one should show it what to do. However, these ambitions by Putin will hardly be realized, therefore, the parties will come to an agreement," said the expert.

The former leader of the party "Musavat" Isa Gambar considers pointless  the discussions about the destruction of the Su-24. "Russian Air Force repeatedly violated the border of Turkey and were warned. Therefore, Ankara's actions are consistent with international standards and are justified," he said, commenting on the incident with the plane.

The destruction of the aircraft  showed the  tension in the region as a result of Russian intervention in Syria.  "This should be a warning to Russia, which  itself has shaken a modern world order by  its  actions against Ukraine," he said.  In his opinion, Azerbaijan must support Turkey and make a choice in favor of Euro-Atlantic integration.

Member of Parliament Fazil Mustafa called the destruction of the Su-24 "forced protection" in response to the inconsiderate actions of Russian and Moscow ignoring numerous warnings. Moscow's actions in Syria, ignoring the opinion of Turkey has long created tension in the region. "It is not a civilian aircraft that was shot down  by the pro-Russian separatists over Ukraine to raise the noise right now. It was a bomber, which bombed ethnic Turks," said Mustafa. He is  confident that the issue will be resolved by negotiation.

Regarding the position of Azerbaijan, Baku should be on the side of "who is right", but to refrain from sharp statements.