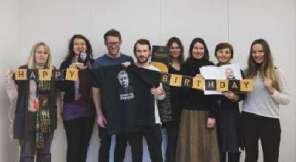 Today is Intigam Aliyev’s birthday, the second he will spend in prison. Human Rights House Network wishes him a happy birthday and repeats its call for his release. His absence is far from unfelt and unnoticed, as the Azerbaijani authorities would undoubtedly prefer.

Intigam Aliyev, a prominent human rights lawyer from Azerbaijan, was given a 7.5 years sentence earlier this year. He has also been deprived of the right to hold an official post for three years after his prison sentence.

In this excerpt, taken from a statement by Annagi Hajibeyli, a friend and fellow human rights lawyer, Intigam Aliyev is celebrated for his professional proficiency and his humanity.

"The arrest of Intigam Aliyev, more than being simply illegal, was an attack on morality. Yes, the arrest of a person who fights for human rights with all of his being, sacrificing his health, time, and efforts for this struggle, is nothing but immoral. What else can you call the arrest of a man who spent long nights in the office working towards fulfilling his professional and civic duty, often sparing no thought about his own health?

This man worked selflessly, as one-person legal machine, often free of charge, to protect the rights of thousands of people in the international forums and in the European Court.

Intigam is a great jurist; he is one of those rare people who demonstrate their truly boundless respect for human rights and personal freedoms. He is truly an Azeribaijani national treasure; he personifies the faith in the future of this nation. He is a gentle human being, yet uncompromising when it comes to injustice and betrayal, an example of non-political opposition. This is his very essence, his policy a voluntary dedication to justice.

The arrest of Intigam was because of these values.

Intigam is a person who achieved great work and influence, and made a valuable contribution to the work of numerous lawyers, human rights defenders and journalists.

His genuine and sincere modesty, when he called everyone to stay positive and give their time to other illegally arrested people, but not to his own arrest perfectly illustrates his very essence.

His arrest is the revenge of those who are without modesty, sincerity, selflessness and respect for their fellow human beings. Their aggressive and unjust behaviour betrays their weakness – clearly unable to compete in a fair and respectful manner.

Not long ago, the Human Rights House Network hosted an international conference in Vilnius. Intigam Aliyev was the moderator of this important event, which was attended by representatives of various countries, international organizations and by human rights defenders. Everyone was thrilled with his expertise and ability to manage the event, to listen and evaluate different views and to guide everyone's thoughts in a single direction.  It was a moment for Azerbaijan to be proud of; its people professing the ideals of democracy and the rule of law to an international audience.”