U.S. urges Azerbaijan, Armenia to improve the atmosphere for peace negotiations ahead of next presidential summit 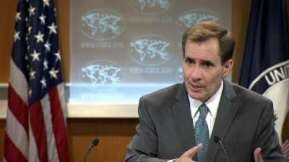 Later this month the OSCE Minsk group co-chairs will hold the next summit between Azerbaijani and Armenian presidents.

The U.S. calls on the sides to 'take all steps to avoid violence and to improve the atmosphere for negotiations to take place in good faith at the summit,' John Kirby, State Department's spokesperson said on Wednesday,  December 9, TURAN's correspondent reports.

'The recent escalation of violence and the use of heavy weapons are unacceptable and we call for the sides to strictly adhere to the ceasefire regimen,' he said, while expressing Washington's deep condolences to the families of those who died or were injured in recent incidents in the Karabakh conflict.

'We also remind the sides that these attacks do not conform to the commitment by the presidents of Armenia and Azerbaijan to resolve the Nagorno-Karabakh conflict peacefully,' he added.

When asked whether Washington concerned that the tensions between Turkey and Russia may have contributed to the escalation between Armenia and Azerbaijan, the State Department spokesperson said, they're concerned about the escalation itself and not necessarily the source.

'Obviously, in both cases we want to see tensions de-escalated and for cool heads to prevail. But rather than do a cause and effect, let me just state we’re – as I said, we’re concerned about this violence and we are certainly – continue to monitor and watch the relations between Turkey and Russia, particularly over the shootdown a couple weeks ago. We want to see the tensions de-escalate.'