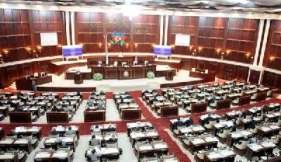 Deputy Chairman of the parliamentary committee on legal policy Rovshan Rzayev has prepared a bill entitled "Situation of human rights in the United States." The document appeared a week after the Helsinki Commission of the US Congress introduced a bill "The act of democracy in Azerbaijan in 2015" providing for sanctions against the government for human rights violations. The bill Azerbaijani MP speaks of human rights violations in the United States, racial and religious discrimination.

It is alleged that the intelligence agencies of America to establish total control over the society and limit the freedom of speech and press. At the same time, the author refers to the words of Edward Snowden. Then it talks about corruption and electoral fraud in the United States, not the perfection of the electoral system of America. The document also points to the biased  position on the Karabakh conflict.

On this basis, Rovshan Rzayev proposes to introduce visa sanctions against those represented in the government and their families; Congressmen, senators, leaders of the media, interest groups, discrediting Azerbaijan and their families; those receiving more financial resources from cooperation with the leadership of the United States and others. The Cabinet of Ministers recommended to suspend all due state structures of Azerbaijan with US companies, to terminate existing contracts and abandon the new economic and trade ties. It is proposed to suspend the program of US NGOs in Azerbaijan, freezing their bank accounts.  Stop the cooperation in the energy, military and security, to suspend Azerbaijan's participation in operations in Afghanistan İSAF, prohibit the use of the infrastructure to support operations in Afghanistan.  To withdraw the US from the co-chairs of the OSCE Minsk Group.

"These sanctions could be eliminated if these problems are solved, and the United States will demonstrate a commitment to international law in the Karabakh issue, impose sanctions against Armenia and stop connection with the Karabakh separatists."

In an interview with Turan Rovshan Rzayev confirmed that  he is the author of the bill. He explained this by saying that under the influence of the Armenian lobby the United States  takes unfair position in the Karabakh conflict.

At the same time, Rzayev noted that he has not yet submitted the bill, but will do so in the near future, possibly before the end of  the year.