The change in 2016 was inevitable 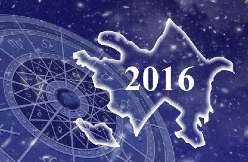 The change in 2016 was inevitable for Azerbaijan, but  not always they will be pleasant.  Changes in the affairs will be so though, that  the authorities will not always have time to analyze the situation, which can lead to  wrong decisions.  There can be a real threat  to the financial position. Probably, there will be the transition to hard saving regime and carefully monitor all expenditures.

In addition to Azerbaijan, Turkey, Indo-China, Iran, Afghanistan, Switzerland, and Hungary also enter the group of the sign of Scorpio.

Throughout 2016 Azerbaijan will suffer from the powerful combined effect of Mars, Venus and Pluto. This combination in the Scorpio horoscope for 2016 is not something unordinary, but in general, the  life in the country under such a situation will  develop  very sternly. And everything will be like in the old fairy tale: "All the crowd looked at the king, and only a king did not at  anyone." One of the most curious aspects of the situation will be the fact that throughout the year Azerbaijan will play not  very  pleasant role  for  Rome,  where all roads lead.

In general,  the year 2016 will continue to push the Scorpions to the most radical solutions. In  general terms,  for Azerbaijan the year can be divided into three stages, each of which is characterized by its own set of distinctive features.

The first phase will include the first three months of the year and a half of April to the middle of the second decade. This phase can be described as the most vibrant and dynamic. This is probably due to the fact that in these months of 2016 and until mid-spring Mars against members of the zodiacal sign of Scorpio will be specially active. There is no doubt that at that time, the country will experience a special uprising, which generally will help solve many of life's situations.

In the second stage, during the spring-summer period, from the end of April until the end of the summer month, the dynamics of the events  will  be calmed a little. During this period, 2016, Venus recommends not to give in to the adventure. President recommended to be honest, open and completely independent from outside influences. Of course, it is logical to listen to their colleagues, especially if they are well aware of what they say and really understand the subject. But in any case, it is necessary to pass through itself some core elements of what is happening, it will allow to "live" is what he says and what calls on.

The third stage, which begins with  coming of  autumn and will complete in 2016, will be the most peaceful and harmonious. During this period, the influence of celestial bodies in t

he solar system will be minimal, it  means that the events happening around them will  be independent. Despite the overall decline in energy dynamics, working direction will literally bloom.

At the end of 2016  the working direction should be consolidating for the whole society. And this time, it is important to bring order in  public relations.

Each person individually is rather emotional than aggressive, but when people come together, it reminds a disturbed beehive.

In the architecture of these ethnic groups there is the desire for a strong, solid construction with thick walls, masonry, and  strong fences; often with a large and vicious, invisible from the street courtyard, without  an external decorations, but there can be all the signs of prosperity and wealth inside.

Territories of these countries are rich in natural resources, the oil, or serve as an arena to attract financial resources from all over the world. Their people can not be called militant in the usual sense of the word Martian; they are likely to prefer to buy peace than fighting. However, in case of a serious threat to the wealth of nation, they become invincible, and use all means of struggle, until the sacrifice.

This summary Forecast is based on horoscopes by different schools, analysis of the political and economic situation and anticipated events in 2016.

Russia will not let Turkish products via Azerbaijan