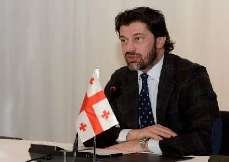 Georgian media reported about another secret meeting of the Energy Minister Kakha Kaladze with representatives of Gazprom.

According to these data, the purpose of the meeting is to seek the replacement of 50% of the imported Azerbaijani gas by gas from Russia.

Kakha Kaladze met in Switzerland with the head of Gazprom-Export Elena Burmistrova. The meeting was held on December 27 and Kaladze went by a charter plane.

The Georgian expert Soso Tsiskarishvili considers that Tbilisi intends to replace Azerbaijani gas by Russian gas. According to him, the project will be implemented by the International Oil and Gas Corporation, which is controlled by the Partnership Fund of Bidzina Ivanishvili.

Note that the talk about plans for the resumption of purchases of Russian gas to Georgia has been going on for a long time. Initially, this was stated by the former Prime Minister Bidzina Ivanishli last year.

"I do not see anything wrong in the diversification of the market, to give our businesses the ability to buy gas where they want," said Ivanishvili.

"We are also trying to get the Iranian gas for Georgia," he said in October 2015. When reminded that the Azerbaijani gas is cheaper than the Russian gas, he said that business people are not crazy to buy expensive. "We are grateful to the Azerbaijani side, to SOCAR (the supplier of 80% of gas to Georgia), but if possible, we’d like to avoid one company being a monopoly, so it is only good," he said.

At the same time, Gazprom CEO Alexei Miller discussed the possible gas supplies to Georgia with Georgian Energy Minister Kakha Kaladze in Milan. According to the Georgian Minister, Georgia would like to buy more Russian gas at competitive prices.

A month earlier, on 25 September Miller and Kaladze discussed gas supplies to Georgia and its transit to Armenia in Brussels.

The opposition criticized the Georgian authorities for contacts with Gazprom, and the President Giorgi Margvelashvili called for a Cabinet meeting to discuss the possible dangers of cooperation with Gazprom. In turn, Baku does not hide displeasure against such actions of Tbilisi, not understanding the logic of the Georgian leadership.

The Georgian opposition believes that the billionaire Ivanishvili, having 1% of the shares of Gazprom, is acting in his own interests and to the detriment of the interests of Georgia, trying to spoil the relations with Azerbaijan. In addition, the energy dependence on Russia threatens Georgia's independence.

According to the former adviser to the Prime Minister of Georgia Giorgi Khukhashvili, to return to the Georgian market, Gazprom should organize "commercial supply" to the Georgian consumers. In fact, it is unprofitable to Gazprom, but it could break the system of relations between Baku and Tbilisi.

He believes the diversification problem is far-fetched. Azerbaijan supplies gas stably at a low cost, and it does not threaten Georgia. So why in this situation should Georgia spoil its relations with Azerbaijan?