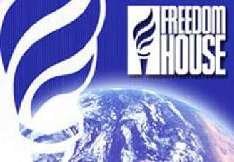 Anxious Dictators: Global Freedom under Pressure is the title of the annual report on the world situation with human rights from Freedom House.

As noted in the report, in 2015 the world survived several crises, which led to xenophobia in democratic countries and hit the economies of countries producing natural resources that strengthened the attacks by the dictatorships against dissidents.

As a result of all these processes, this is the 10th year of global freedom declining trend.

The refusal of Saudi Arabia to reduce oil production and an increase in its production in the United States has created a threat to the welfare of repressive regimes in oil-producing countries from Angola to Azerbaijan, the report says.

Azerbaijan again, as for many years, is among non-free countries.

As noted in the report, such a rating of Azerbaijan is predetermined by the persecution of journalists, opposition activists and human rights defenders, and by the violation of the right to a fair trial.

"The parliamentary elections in Azerbaijan were held in an atmosphere of intense attacks on civil society. Elections in the situation of the boycott by the opposition resulted in a meaningless victory of the authorities," the report said.

The neighbors of Azerbaijan, Georgia and Armenia, are in the group of partly free countries. This category also includes the "territory" of Nagorno-Karabakh.

Along with Azerbaijan this group includes two former Soviet countries, Uzbekistan and Turkmenistan.

On the index of Internet freedom, Azerbaijan is among partly free countries.