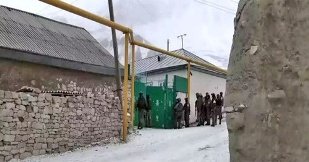 During the week of February 15-21, 2016, at least 25 persons fell victim to the armed conflict in Northern Caucasus. Of them, five persons were killed, and 20 others were wounded. These are the results of the calculations run by the "Caucasian Knot" based on its own materials and information from other open sources.

On February 17, the counterterrorist operation (CTO) legal regime was introduced in three districts of Dagestan the Khiv, Tabasaran, and Suleiman-Stalsky Districts. To the north of the village of Nyutyug of the Suleiman-Stalsky District, special units of the Russian FSB and the Russian Ministry of Internal Affairs (MIA) discovered two suspected militants, who opened fire on the law enforcers while they were trying to detain them. As a result of the armed clash, the suspects were killed.

On February 15, a VAZ-2109 car drove to a GIBDD (road police) checkpoint near the village of Djemikent in the Derbent District of Dagestan, and an explosion occurred. Three persons were killed, including a policeman detached from Mordovia, a local policeman, and an alleged suicide bomber. In total, 18 people were injured, including eight soldiers. Law enforcers reported that the explosion was allegedly committed by Admir Talibov, a 23-year-old student of an Astrakhan institution of higher education, who had come to Derbent to visit his father. However, according to the results of the genetic examination, the explosion was committed by 25-year-old Magomedali Murliev, who was on the federal wanted list. He was a native of the Suleiman-Stalsky District and was a member of the criminal grouping "Southern". The "Islamic State" (IS), recognized as a terrorist organization, has claimed responsibility for the explosion.

On February 18, Dagestani law enforcers carried out searches in the house of 54-year-old Bes Sefibegova, the Muslim wife of Abutdin Khanmagomedov, in Guruchay Street, and in a private house in Sheboldaev Street, where Redjab Ismailov lived (according to the law enforcement bodies, he is a member of the terrorist grouping "Southern"). In both houses, the law enforcers discovered improvised explosive devices (IEDs). Both IEDs were destroyed at the places. Bes Sefibegova was detained.

On February 16, 46-year-old Elzhan Talibov, the father of Admir Talibov, suspected of committing an explosion at the GIBDD checkpoint near the village of Djemikent, was brought to the Derbent ROVD. A source from the law enforcement bodies reports that "during the search, about 30 rounds were found and seized from Admir Talibov." A criminal case has been instituted.

On February 19, in Grozny, law enforcers forced Olga Pavlova, a "Caucasian Policy" correspondent, into their car and brought her away. Two employees of the media, including a citizen of Finland, were detained together with Olga Pavlova. On the same day, the law enforcers released the journalists and explained them that they received the information about the preparation of an illegal report. The journalists said that the law enforcers detained them because of suspicion of connections with the "Islamic State" (IS).

On February 20, the police detained two suspected accomplices of a suicide bomber, who blew up a car at the GIBDD checkpoint in Djemikent. The suspects are accused of purchasing the car for the bombing and components for improvised explosive devices (IEDs), as well as of providing with food members of the organized criminal grouping "Southern" in Derbent. Later, an official of the Dagestani law enforcement agencies reported that the number of detainees had increased and reached four persons.