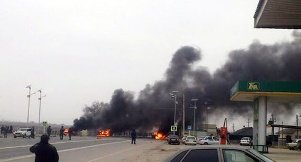 Suppression of the Salafi communities in the northern and central regions of Dagestan has contributed to concentration of radical Salafis in the southern part of Dagestan, and the recent armed incidents in the region are explained by the above fact. This opinion was expressed by experts interviewed by the "Caucasian Knot".

The "Caucasian Knot" has reported that the explosion at the GIBDD post near the village of Djemikent occurred in the morning on February 15. Dagestani authorities confirmed the death of two policemen and 18 others wounded in the explosion; other sources reported four casualties, including the suicide bomber.

Since the beginning of the year, at least two armed clashes occurred in the regions of Southern Dagestan. The situation in the southern part of the republic has deteriorated on the background of the increasing power pressure on the Salafi community. Let us remind you that recently, in Dagestan, mosques visited by Salafis for prayers have been massively closed or imams in them have been replaced with candidates appointed by the Muftiyat. In total, according to members of the Salafi community, since the beginning of the year, the pressure affected 12 mosques.

Orkhan Djemal, a Forbes reporter, believes that the activities of militants can be explained by the operation carried out by the Russian armed forced in the Middle East, as well as by pressure on the Salafi community.

"If there is pressure, the radicalization is obvious: they are communicating vessels," Orkhan Djemal said.

After the law enforcement bodies suppressed the activity of militants in the northern and central part of Dagestan, the republic's south became a zone of activities of the armed underground. This was told to the "Caucasian Knot" by Mikhail Roschin, Senior Researcher at the Centre for Studying Central Asia, Caucasus and Volga-Ural Region of the Institute of Oriental Studies of the Russian Academy of Sciences (RAS).

While the Salafi movement was suppressed in the centre of Dagestan and in the north of the region, the population of the republic's south accepted radicals with sympathy, and that led to the protest movements.

"The terror acts, committed in Dagestan during the recent six weeks, are the result of active forces of the Salafis," said Mikhail Roschin.

The "Caucasian Knot" correspondent has been told by political analyst Ruslan Martagov, an advisor to the "Antiterror" Foundation (in the period from 2005 to 2008), that in the near future, we should expect an even greater increase in the activity of militants in the Caucasus.

According to Ruslan Martagov, the above can be explained by both the military operation in Syria and the deterioration of the situation due to the increase of pressure used by the authorities against the Salafi community. Members of the Salafi community should not be equated to IS members; however, there are a lot of Salafis who "sympathize" IS members and who are willing to "defend Islam," Ruslan Martagov believes.