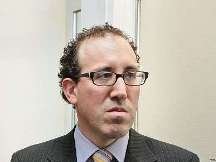 Joel Simon, CPJ Executive Director has sent a letter to Federica Mogherini, High Representative of the EU for Foreign Affairs and Security Policy on the eve of her visit to Azerbaijan.

The letter reads:
"Dear Commissioner Mogherini,
We at the Committee to Protect Journalists, an international press freedom advocacy organization, write to remind you of Azerbaijan's abysmal record on press freedom, and ask you to make press freedom a priority in your talks in Baku on Monday.
In the last several years--including during Azerbaijan's 2014 chairmanship of the Council of Europe and in the run-up to the 2015 European Games hosted by Baku--independent journalists, media and human rights defenders were subjected to retaliatory attacks, arrests, and official harassment.
In 2008 authorities banned international broadcasters, including the BBC, Radio Free Europe/Radio Liberty, and the Voice of America from broadcasting on national frequencies. More recently, authorities have shuttered independent online news outlets Obyektiv TV, Paz TV, Baku Post, Kulis, Ailem, and Mediaforum on administrative grounds. In December 2014, the online broadcaster Meydan TV announced that it was forced to stop operating in Azerbaijan because security services were harassing its local reporters.
Azerbaijani authorities have also jailed independent journalists on fabricated, retaliatory accusations of hooliganism, drugs possession, treason, and abuse of office, CPJ data shows. In 2014, the year Azerbaijan chaired the Council of Europe's Committee of Ministers, Azerbaijan was also the leading jailer of journalists in Europe and Central Asia. Officials in Baku have further expanded legal restrictions on the press and civil society groups.
At least eight journalists, including award-winning investigative reporter Khadija Ismayilova, still languish in Azerbaijani jails. Details of their cases are attached to this letter. Despite numerous procedural violations and lack of evidence in each of their cases, courts have denied the journalists' appeals.
All of our findings have been reflected in reports and statements issued by other press freedom and human rights groups, and by the office of the Council of Europe's Commissioner for Human Rights, and that of the president of the Parliamentary Assembly of the Council of Europe. Most recently, in December, Secretary General of the Council of Europe Thorbjørn Jagland announced that his office had launched an official inquiry into violations of Azerbaijanis' basic human rights.
We commend the commitments to press freedom you expressed on World Press Freedom Day and the International Day Against Impunity in Attacks Against Journalists, and we encourage you to take this opportunity to stand up for our colleagues imprisoned in Azerbaijan.
Specifically, we ask that you use your Monday meetings with Azerbaijani officials to emphasize the importance of press freedom, to call on your counterparts to create a more tolerant atmosphere for the press, and to stress that revived discussions on a partnership agreement with Azerbaijan are linked to Baku's honoring its citizens' fundamental right to freedom of expression. A significant first step toward that would be the immediate and unconditional release of the eight journalists Azerbaijan currently holds behind bars as a retaliation for their work.
Thank you in advance to your attention to this urgent matter. We look forward to your response”.