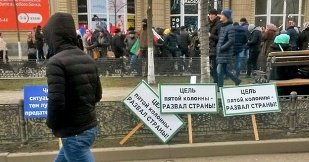 During 2015, in Northern Caucasus, serious violations of human rights still occurred, and human rights defenders, who reported on events in the region, faced harassment. This was reported by the international organization "Amnesty International" (AI) in its report released on February 24.

The "Caucasian Knot" has reported that earlier, the international human rights organization "Human Rights Watch" (HRW) has reported on the deterioration of the human rights situation in Northern Caucasus in 2015.

According to the AI, in 2015, the organization began to receive from Northern Caucasus much less reports of the human rights situation. The AI associates this fact with the toughest crackdown on human rights defenders and independent journalists.

As one of such examples, the AI mentions the attack on the office of the Joint Mobile Group (JMG) of human rights defenders committed in Grozny on June 3, 2015.

In 2015, the freedom of the media in the country, including in the south of Russia, "was still severely limited by state control and self-censorship."

The AI emphasizes the reaction of the Chechen authorities to the article prepared by Elena Milashina, a reporter of the "Novaya Gazeta", about the wedding of a 17-year-old girl and a top-ranking officer of the Ministry of Internal Affairs (MIA), who was much older than her.

According to the report, in the combat against the armed underground, the law enforcement agencies continue to give preference to methods of power operations. There are reasons to believe that the law enforcers continue to commit kidnappings and illegal detentions of residents of the region and subject them to torture.