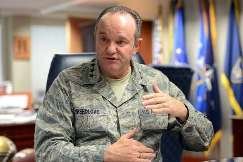 The commander of U.S. forces in Europe says, Russia uses unresolved conflicts, such as Karabakh, as a foreign and regional policy tool in order to preserve its influence in the region.

Gen. Philip Breedlove, who is also NATO’s supreme allied commander in Europe, said on Thursday in Washington that although Russia is part of the Minsk Group process, aimed at  resolving the Karabakh conflict, Moscow has actually increased instability in the region by selling arms to Azerbaijan while maintaining a troop presence in Armenia and that the complicated Karabakh conflict today remains "arguably the greatest impediment to the spread of peace and security through Europe to the Caucasus."

"In fact, violence along the Line of Contact and the Armenia-Azerbaijan border has escalated significantly in the last two years, with 2015 being the deadliest year in the conflict since the ceasefire was signed in 1994," Gen. Breedlove said during testimony before the House Armed Services Committee, TURAN's US correspondent reports.

Russia, he said, modulates Karabakh and other frozen conflicts by manipulating its support to the participants, while engaging in diplomatic efforts "in order to preserve its influence the affected regions."

"Just as the Soviet Union dominated the nations of the Warsaw Pact, Russia coerces, manipulates, and aggresses against its immediate neighbors in a manner that violates the sovereignty of individual nations, previous agreements of the Russian government, and international norms."

Describing the prolonged conflicts in states around the Russian periphery as "frozen” belies the fact that these are ongoing  and deadly affairs often manufactured by Russia to provide pretext for military intervention and ensures the Kremlin maintains levels of influence in the sovereign matters of other states.

James Clapper, the director of US national intelligence, also told another Congressional Committee on Thursday that tensions between Armenia and  Azerbaijan over Karabakh remained high in 2015.  "Baku’s sustained military buildup coupled with declining economic conditions in Azerbaijan are raising the potential that the conflict will escalate in 2016," he said before the House Intelligence Committee.

Azerbaijan’s aversion to publicly relinquishing its claim to Karabakh proper and Armenia’s reluctance to give up territory it controls will continue to complicate a peaceful resolution, he added.

Speaking on Russia, Breedlove, who has led EUCOM during the command’s biggest transformation in a generation, told Congress members while Washington did not foresee a need to return to a Cold War-style military posture, but the era of trying to make a partner of Russia "is over," and key U.S. capability gaps need to be addressed.

"Russia does not want to challenge the agreed rules of the international order...  It wants to rewrite them,” he added.