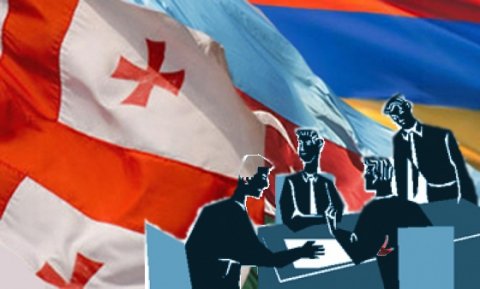 The moderator of the conference, Alexei Vlasov, editor in chief of Vestnik Kavkaza, noted that 2013 would be full of various political events which could influence the situation in the region. The South Caucasus entered into a long election cycle. Elections in Armenia have just ended. Presidential election in Azerbaijan and Georgia will be held in autumn. Vlasov sees two initiatives in the political field – the Eurasian project which is being formed by Russia and Eastern Partnership which is being formed by the EU.

Alla Yazykova, head of the Mediterranean-Black Sea Center of Institute of Europe of RAS, stated that “summarizing the results of the Russian policy in the South Caucasus in the last two decades, we must admit that the result was gradual weakening of Russia's position in the region and in its relations with Georgia, Azerbaijan, and more recently to some extent with Armenia. Now, in my opinion, the communication with the EU is much more difficult than even with the United States, given the crisis and confusing situation in the EU. Assessing the prospects for relations in general with the South Caucasus, it cannot be denied that the military conflict in the Caucasus worsened Russia's relations with the Western world and, in particular, with Georgia and the subsequent global financial crisis make us think about the future trajectory of most Russian policy and how it responds to the challenges faced. Meeting the challenges of maintaining stability on the southern borders of Russia, as well as the historical basis of its relations with the peoples of the South Caucasus, requires overcoming the existing contradictions in the relations with the countries of the region, on the one hand, and cooperation with the international community in solving its problems, on the other hand. This requires the development of new strategic approaches and finding solutions in dealing with major world powers and their unions.”

Alexander Dzasokhov, Trustee of the Russian Council on International Affairs, paid attention to the dialogue between the countries of the region. “A new geopolitical cycle has come. This should be kept in view, because after a failed attempt of a unipolar world and a bipolar world, a quite understandable period has come when neighbors, and often not even the neighboring states in the geographical sense, seek common interests to form a multi-polar world. This is the first point. The second point is related to the fact that until 2004 there were regular meetings of the Caucasian states. This occurred most often with a few exceptions, within the CIS summit. In the autumn of 2004, when a political force, as they say, Saakashvili, came to power, this enhancement was unreal. And it is strange, if you look at our Caucasus, the Greater Caucasus. This is a rare and very exceptional case when the countries of the region are not collected together and do not see any urgent issues, issues of new challenges and strategic issues. Do not assume that I may be getting ahead of our ability, but we must draw attention to the subject, to form public opinion, because we are conduct disunited discussions, and even if they are at a substantial level, but there is no resonance, we do not achieve the goal. We need, perhaps, to raise the level of discussion. So I would even think of a good, thorough preparation of all-Caucasian forum of not only the authorities, but what is more important - powerful, existing and operating with a reputation and expertise civil society organizations,” Dzasokhov said.

Speaking about Russian-Georgian relations, Alexander Skakov, the coordinator of the working group on the North Caucasus of Central Asia and the Caucasus Studies Center of the Oriental Studies Institute of the RAS, stated that there will be sluggish negotiations between Georgia and Abkhazia and South Ossetia and extension of humanitarian cooperation. Changing of power in Tbilisi caused positive tendencies, but they cannot be considered as promising. The new authorities may try to count on Russia’s reconsideration of its attitude toward Abkhazia and South Ossetia; and the USA pushes Georgia to turning this process into a subject of a bargain with Moscow. According to Skakov, in the situation Tbilisi’s policy toward its north neighbor is being developed in Washington and Brussels. One of measures for settlement of Abkhazia and South Ossetia issue can be restoration of roads which are very important for the transport system of the region, but today such projects have no adequate support for various reasons, Skakov thinks. Skakov mentioned difficulties within Russia itself. He says that there are “hawks” in Russian politics who think that Tbilisi shouldn’t have any contacts with Abkhazia and South Ossetia before it recognizes their independence or Georgia’s joining the CIS or even the Eurasian Union. Skakov believes this approach is not effective because leads to a dead-lock.

Alexander Iskandaryan, Director of the Caucasus Institute, political scientist, noted that “the study of the Caucasus for Russia, I think, is of importance, not only academic, but also practical. And, of course, in the South Caucasus, the scientists themselves should figure out what is happening here, in Russia, and try to somehow share that information with the Russians, considerations that exist – it is also important.”

Speaking about settlement of the Nagorno-Karabakh conflict, Iskanderyan said that the process of negotiations under the OSCE Minsk Group is being criticized for no reason: “It has no aim to settle the conflict. It is impossible and there is no field for talks. Its task is simple – to make negotiations continue, while the process itself should be international.”

Orkhan Sattarov, the head of the European bureau of Vestnik Kavkaza, spoke about importance of Azerbaijan for Russia, considering difficulties in the situation over Iran and the role which is played by the country in the region. The most important problem for Azerbaijan, according to the expert, is settlement of the Nagorno-Karabakh conflict.

Seymour Aliyev, the head of the Russian editorial of Trend, spoke about successes achieved by Azerbaijan in improvement of living conditions of Azerbaijani people. The expert noted that the GDP tripled, and its growth would be impossible without diversification of economy. Non-oil segment of economy takes a half of the GDP, and last year it grew by 10%. This year Azerbaijan has launched its first satellite in space. Wide-scaled projects will be implemented in the nearest future in different spheres.

Experts agreed that it is necessary to build a clear policy in the region by Moscow, because the Caucasus is full of conflicts and demands close attention by Russian politicians.