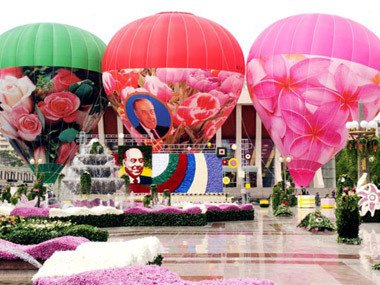 On May 5, many Americans unknowingly celebrated the 90th birthday of a corrupt foreign communist dictator by attending the “Flower Day” event hosted in the National Mall in Washington DC by a foreign lobbying group Azerbaijani-American Alliance (AAA), the Azeri Report says.

According to the article the event was described as a mere “Celebration of Azerbaijani Culture and Friendship”. AAA clearly and deliberately misrepresented the facts and hid the real reasons behind the “Flower Day” festivities from residents and visitors of the US capital, trying to trick them into celebrating the late Azerbaijani dictator’s birthday.

It says that the “Flower Day” is established in Azerbaijan as an official May 10 birthday commemoration for the founder of corrupt and repressive Aliyev dictatorship, the former communist boss and KGB general, Heydar Aliyev, who is also the father of the current president Ilham Aliyev.

But AAA’s announcement of Flower Day celebration in DC mentions nothing about Heydar Aliyev, to whom the event is dedicated in Azerbaijan. Instead, it provides false and misleading information, by stating that “The Azerbaijani holiday of Flower Day occurs in early May and has been recognized for more than half a century. Flower Day celebrates the arrival of spring and the spirit of hope and renewal that blooming flowers represent.”

“The real “arrival of spring and the spirit of hope and renewal” have been celebrated for centuries in Azerbaijan during the Novruz holidays in March - at the same time as in many other countries of the region. The information about Novruz holiday in Azerbaijan can be found easily on internet, anywhere from Azerbaijani President’s official websites to AAA’s own Novruz webpage,” the Azeri Report says.

As for the Flower Day, it is marked for Heydar Aliyev’s May 10 birthday commemoration that started only in the year 2000, not “more than half a century” ago as AAA states. And it really took off only after his death in 2003, when his son Ilham Aliyev took over the presidency in fraudulent elections marred with violent crackdown on peaceful protests, the article reads.

“Each year, on May 10th, millions of dollars of state funds is spent on bringing exotic flowers to Baku and organizing lavish displays to mark the birthday of a long dead founder of Aliyev regime. This is just one of many expressions of personality cult around the figure of Heydar Aliyev. The Azerbaijani Academy of Sciences has a whole department dedicated to “Aliyev Science”. His giant portraits and statues are present all over country; the country’s largest airport bears his name, and so do thousands of streets, parks and buildings,” the article reads.

It is noted that Azerbaijani officials and opportunity seekers at all levels try to outdo each other in issuing praises and hosting events in honor of the “Dear Leader” Heydar Aliyev. “This is largely aimed to please his son, the current head of the corrupt and repressive regime, Ilham Aliyev. The Azerbaijani government also exerts considerable efforts and spends large sums to advance this personality cult outside the country’s borders,” it says.

According to the author of the article, it is not surprising that a lobbying group like Azerbaijani-American Alliance (AAA) would promote corrupt Aliyev regime’s personality cult in the US. After all, AAA is run by Anar Mammadov, the son of the Azerbaijani minister of transportation Ziya Mammadov, whose name is mentioned as one of the top corrupt Azeri officials anywhere from Wikileaks diplomatic cables to international Organized Crime and Corruption reports. AAA funding, according to FARA records, comes from Ziya Mammadov’s shadowy business empire “ZQAN Holding”.

“Apparently that money enables them to buy some fun time with US officials, including the House Speaker John Boehner, among many, and a favorable PR articles in prestigious US magazines,” the article says.

According to the article apparently, the Aliyev regime suffered major embarrassments from recent setbacks to its attempts to spread the Heydar Aliyev personality cult abroad. “It seems that once the truth about who Heydar Aliyev really was emerges, people in foreign countries are not so eager to celebrate former KGB general’s birthday and host his statues, even when paid millions of dollars by the Azerbaijani government to do so. Perhaps some within the regime in Baku and its representatives abroad recognize this as well, and they now try to hide the “shame” of their personality cult “addiction” by disusing it as innocent May “Flower Day” celebrations of “the arrival of spring”.