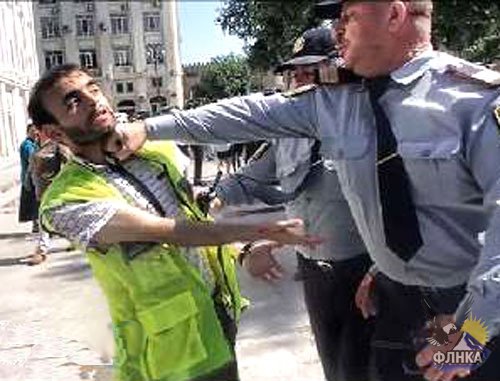 Rasim Aliev and Mekhman Guseinov, the employees of the Institute for Reporters' Freedom and Safety (IRFS), said that on June 3 in Baku they were exposed to policemen's pressure while covering a rally of solidarity with the ongoing demonstrations in Turkey in support of local activists. Law enforcement authorities promise to conduct an investigation.

Let us remind you that the action on June 3 in Fountain Square in Baku was attended by about 50 people, who called upon the Turkish government to abandon the plans for restructuring the Taksim Square in Istanbul, and stop putting pressure on activists.

"I was shooting a video of a policeman's dispute with a young woman-participant of the action. The policeman was abusing the girl. When he saw that I was shooting, he lashed out at me, began waving his arms and hit me several times with his fist in the throat, saying, 'Whom are you filming here?'" Rasim Aliev told the "Caucasian Knot" correspondent.

Mekhman Guseinov, another reporter of the IRFS, told the "Caucasian Knot" correspondent that he was filming the attack on his colleague. In response, the head of the police unit gave an order to his subordinates to detain Guseinov and destroy all the footage that he took.

Let us note here that in Azerbaijan journalists had been exposed to pressure while covering the protests. Thus, Emin Guseinov, the head of the IRFS, got under pressure during the protest on January 12 in Baku against non-combat losses in the army. A policeman pushed him to the ground during the demonstration; and the journalist received a trauma by hitting his head on a stone. The inquiry into that incident was never completed; and no one was punished.