Cracking down on dissent in Ilham Aliyev's Azerbaijan 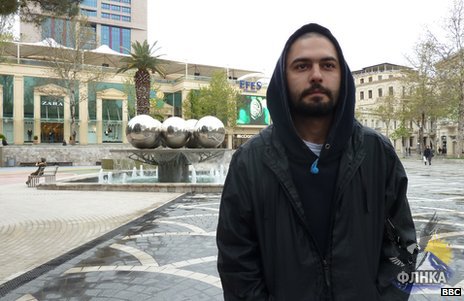 "I try not to cry so that I can be strong for my son," mathematics teacher Sakina Gurbanova says, struggling to hold back the tears, as she shows me a picture of her son.

A handsome, smiling 27-year-old law graduate, Zaur was pulled off the street by plain-clothed policemen on 1 April. Since then he has been in jail awaiting trial, accused of possessing arms.

But his mother says their home was never searched for weapons and that he is being punished for criticising the government.

"I'm not even allowed to visit my son," she says. "I don't know how they can be so cruel to not let me see him even for a few seconds. Do they not have mothers?"

If you want big changes, at least one generation has to sacrifice itself”

Zaur is one of seven youth activists from the opposition movement NIDA currently in prison awaiting trial. If found guilty, he faces up to eight years in jail.

Over the last two years dozens of journalists, opposition activists and bloggers have been arrested in Azerbaijan, accused of possessing drugs or weapons. Or charged with hooliganism.

But according to human rights groups, the charges are trumped up - an authoritarian government's attempt to stamp out any Arab Spring-style uprising, they say. And now, faced with presidential elections in October, the authorities are accused of clamping down even more heavily.

New regulations mean that participants in anti-government demonstrations in the city centre face heavy fines worth more than the yearly earning of many Azeris. And tough new libel laws are criminalising criticism online.

In Baku's Fountain Square, I meet a young man, Araz, who tells me how police violently broke up a peaceful protest he took part in here.

Araz says police beat him and then sprayed tear gas into his eyes while he was being held by another officer. He was thrown into a police van, where he saw another officer move through the van, beating detainees, and punching one in the face repeatedly until he bled.

I ask Araz why he takes part in protests, when he knows the risks.

"If my parents had done this, I would now be living in a normal country," he tells me. "Somebody has to do something at some point. If you want big changes, at least one generation has to sacrifice itself. And I think that we are that generation."

I put those allegations of police brutality to Azeri government spokesman Elman Abdullayev, a charismatic and friendly young man, with impeccable English.

The right thing to do right now would be to embrace Armenian citizens in Azerbaijan. But that would end the conflict. And the government doesn't want that”

"Nobody can guarantee a crowd will stay peaceful," he says. "It's a chaotic movement of people. The job of the police is to ensure security. If there's no security, then the police are not doing their job."

In an Azeri context, security means no visible protests. And indeed any gathering in the centre of the capital is seen by the authorities as subversive and a source of instability. Even doing the Harlem Shake.

A 21-year-old man has just been jailed, accused of filming a short online video of a few young people doing an Azeri version of the dance craze earlier this year. He will spend the next few months in jail, awaiting trial, where he will be charged with hooliganism.

The Azeri government is seen by critics as not only humourless but also nervous.

President Ilham Aliyev, whose family has ruled for decades, looks set to win October's elections. But now there are signs that dissatisfaction is spreading beyond the traditionally small opposition circles of young, digitally minded youth activists.

Recent protests have also involved middle-aged mothers, outraged by the unexplained deaths and abuse of their sons conscripted into the Azeri army. Or local shopkeepers who took to the streets to protest against corrupt landlords.

And there are suspicions that the government is trying to counter this growing dissent, and bolster support, by appealing to nationalist sentiment.

"I think the president's family is using the nationalist card to distract people from the real problems, such as corruption," says investigative journalist Khadija Ismayilova. "They need an external enemy to keep people under control."

And in Azerbaijan, that enemy is Armenia. After the collapse of the former Soviet Union in 1991 the two countries fought a brutal war over disputed territory, which killed tens of thousands of people.

Azerbaijan lost the war, along with 20% of its territory, and more than half a million Azeris were forced out their homes. Two decades later they have not been allowed back, and many are still living in desperate conditions. And along the front line, the tenuous ceasefire is violated regularly, with dozens of soldiers and local farmers killed every year.

Earlier this year, just as the country was seeing an unusually high number of anti-government protests, a scandal erupted over an Azeri book which portrayed Armenians sympathetically. Fortuitous timing to distract from the unrest, whispered government critics. The novel had actually been published months before.

Its author, the renowned Azeri writer Akram Aylisli, was stripped of his literary awards and pension by President Aliyev. His books were publicly burned and protesters gathered outside his home chanting death threats - demonstrations which the authorities did not disperse.

This once-revered writer suddenly found himself castigated as a national villain. "What is the government afraid of?" the elderly writer said, shaking his head sadly, when I visited him in his Baku home.

Azeri soldier Ramil Safarov, on the other hand, was turned into the nation's hero. He chopped the head off a sleeping Armenian with an axe in 2004 in Hungary. Last year he returned to Azerbaijan, where he was supposed to serve out the rest of a life sentence. Only he did not. He was given a hero's welcome, was pardoned by the president and promoted to the rank of major.

"Of course he's a hero," one of Ramil Safarov's neighbours told me.

"Armenians aren't human," another said, when I suggested that a murderer was being lionised. "I would have done the same."

"I think the leaders just love this conflict, they embrace it," the journalist Khadija Ismayilova believes. "The right thing to do right now would be to embrace Armenian citizens in Azerbaijan. But that would end the conflict. And the government doesn't want that."