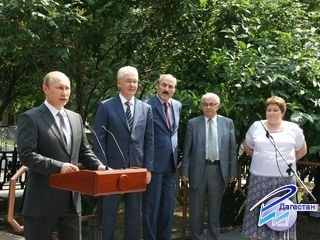 Makhachkala, July 6, 2013. On July 5 the historic part of Yauzovsky Boulevard hosted an official opening ceremony of the monument to the prominent poet and public figure Rasul Gamzatov. The Russian President Vladimir Putin, the acting President RD Ramazan Abdulatipov, the chairman of the republican Parliament Khizri Shihsaidov, the acting Mayor of Moscow Sergei Sobyanin, the chairman of the Federation Council Valentina Matvienko, the deputy speaker of the Federation Council Ilyas Umakhanov, the friends of the poet, political and public figures, Yevgeny Primakov and Alexander Dzasohov, the People's Artist of the USSR Iosif Kobzon, the heads of regional representatives of business communities and other admirers of the poet came to emphasize the importance of the event.

Opening of the monument was one the highlights of a series of events dedicated to the poet’s 90th anniversary. The first four lines of the poem “White cranes” became immortal and have been engraved on the monument.

The decision to erect the monument to R.Gamzatov in Moscow had been adopted by the Committee on monumental art of Moscow City Council in 2008, but later the experts could not determine the exact location of its placement.

In November 2011, the Russian President spoke for erecting the monument in the capital. Then Vladimir Putin noted Rasul Gamzatov’s creativity as an example of contribution of Dagestanis to the Russian culture: "I'm happy that I was personally acquainted with Rasul Gamzatov and had an opportunity to discuss a number of issues with the” true source” of ideas and moral values. I congratulate you on the opening of monument to the great son of Dagestan and Russia". The head of Dagestan Ramadan Abdullatipov thanked friends and family of the great poet, because they had always been closer to the he poet.

"For us Rasul Gamzatov will always be of paramount importance. He is our pride, honor and talent. Rasul Gamzatov is our everything, as they say in Russia about Alexander Pushkin "- the acting President RD confessed.