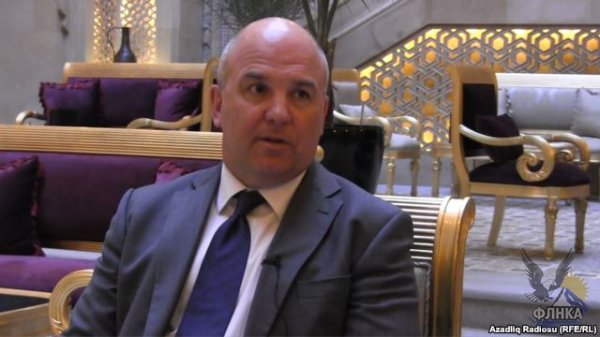 The Council of Europe's human rights commissioner says he wants Azerbaijan to implement a series of reforms before Baku takes over the chairmanship of the Council of Europe (CoE).
Nils Muiznieks told RFE/RL that Azerbaijani officials should release activists, journalists, and opposition politicians jailed on charges that "defy credibility."

Muiznieks also called on Baku to fully respect freedom of expression and assembly before its six-month chairmanship of the Council of Europe begins in May.

"I would hope that in the coming months, in the run-up to Azerbaijan's chairmanship of the Council of Europe, that the [Azerbaijani] leadership will see it as being in their interest to move forward on some of these issues because I think people want to see concrete progress on human rights, both in the context of the chairmanship and also surrounding the discussions about an action plan in cooperation with the Council of Europe," Muiznieks said.

Muiznieks added that, without such changes, Baku would be forced to defend "bad policies and laws."

Muiznieks pointed to Azerbaijan's extension of defamation to online statements as being a disappointing development.

He said he "deplored" the recent prosecution of an online journalist using the new law.

"I think that any attempt [by Azerbaijani officials] to kind of shackle and chain what is being said on the Internet will ultimately fail," Muiznieks said. "The Internet must remain a space of free expression and it is clearly a very important venue for activists and journalists and others who want to express themselves in the public interest."

Muiznieks added that there had been an "intensification of repressive measures" in the lead-up to the presidential election held on October 9. He said this is seen particularly among freedom of expression and assembly.