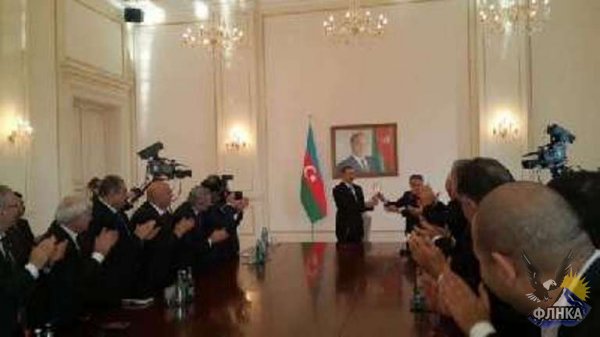 On Sunday, once an independent Committee to Protect Journalists, RUH, awarded the President Ilham Aliyev a title of a "Friend of Press." The award was given to the president in his office on the day-off with participation of 50 representatives of the pro-government and government media.
The prize was awarded on the basis of the survey by 93 media , 89% of which called the president their friend for his concern for journalists , which is reflected in the financial and material support to journalists.

In 2007 under the president Ilham Aliyev was created a Fund to support state media , which provides grants to print media, built apartments for journalists, and one building is under construction.

Aliyev has been awarded this title the second time. The first time his merits were marked in 2010. In the 90s this prize was awarded only to opposition and public figures for their real contribution to the development free journalism which existed then. But this tradition came to an end in 2002 when a friend of the press, which by that time faced a major economic collapse, was awarded the President Heydar Aliyev; then editorial boards were allowed not to pay VAT from the sale of periodicals. It is noteworthy that government publications, the debt of which to the printing house "Azerbaijan" amounted more than 90 % took advantage of that.

Awarding Ilham Aliyev a title of the "Friend of Press" is natural. Just like before 2010, when his stay in office was marked by murder, physical and psychological injuries journalists, the destruction of economic freedom of the press, complete control over television; and during the last three years this practice continues. A journalist Rafiq Tagi was killed, dozens of journalists and bloggers have been arrested, and some not obedient media have been prosecuted.

His merit is that he was finally able to create a comprehensive climate of fear among the media. According to the Media Rights Institute, in 2012 Azerbaijani journalists, at least 60 times, were subjected to physical and psychological pressure , threats , surveillance , arbitrary detention , technical barriers , 10 journalists have been arrested, and 35 lawsuits for defamation have been filed.

Tough changes have been made in 2012 to the laws on getting information , the state registration of legal entities and commercial secrecy. Under the amendments, it is prohibited to make audio and video without the permission of the person, information about the owners of legal entities is regarded as commercial secret, and it makes difficult to carry out a journalist investigation.

In June, in response to international calls for the decriminalization of defamation, Ilham Aliyev signed a law "On Amendments to the Criminal Code of the Azerbaijan Republic ", which criminalizes libel and insults in the Internet.

According to reports from various international organizations, which includes non-governmental organizations and the OSCE, during the presidency of Ilham Aliyev, Azerbaijan rankes one of the lasts in the field of freedom of expression. The country has been included the list of not-free countries, and Aliyev has repeatedly been called a "predator of press."