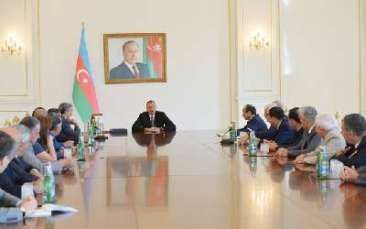 Before the National Press day, marked on 22 July, the President met with the members of the board of the Press Council. "We can be proud that our national press has a long history, and only in the period of independence began to operate  completely free and independently," Ilham Aliyev said.

According to him,  after the abolition of censorship in 1998, in the history of the national press has opened a new stage. Aliyev also praised the work of the Press Council.

Reforms on the development of the press are successful, the national media, "united around the strategic interests of the company on  disturbing questions, and there are contradictions on opinions."

Press should always protect strategic national interests at the international level, Aliyev said. According to him, in recent years there was a serious turn in this issue. The president  complained of the "coordinated" character  of campaigns against Azerbaijan in foreign media on the eve of a major event.

Blackening campaign, launched by the Armenian lobby and other groups, has no effect on the domestic and foreign policy of Azerbaijan, he said.

Aliyev also noted the need to enhance the role of the media in bringing the truth about Azerbaijan to the world community.

Then he promised to support the development of the media and presented diplomas to members of the board of the Press Council by the instruction of the President of state  signed on 20 July.