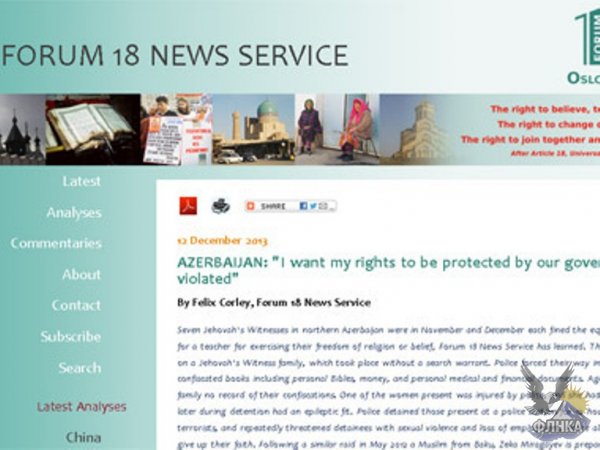 "Seven Jehovah’s Witnesses in one of the northern towns of Azerbaijan were each fined an amount equal to the yearly salary of a teacher simply for exercising their freedom of religion,” it is stated in the article published by Forum18 international organization.
As the article reads, "Police forced their way into the family's home and confiscated books including personal Bibles, money, and personal medical and financial documents. Against the law, police gave the family no record of their confiscations.”

"Police detained those present at a police station for 12 hours, claiming that they were terrorists. They also pressured detainees to give up their faith”, claims the author.

According to the article same kind of situation occurred in May of 2012 with a Muslim from Baku called Zeka Miragayev. The later failed to make the local courts admit that the raid and confiscations of his religious literature by National Security Ministry (NSM) secret police were illegal. Zeka Mirgayev decided to make an appeal to the European Court of Human Rights.

"I want my rights to be protected by our government, not violated," Mirgayev told Forum 18.

As noted in the material, Azerbaijan after the implementation of 2009 Religion law refused to re-register the Jehovah’s Witnesses and other Muslim Communities. The law "makes exercising freedom of religion or belief with other people without state permission illegal”. It contradicts Azerbaijan’s international human rights obligations.

Note that in the U.S. State Department report on "Freedom of religion" it says that despite of the fact that the Constitution of Azerbaijan provides freedom of religion, in practice, the laws and policies of the authorities restrict this freedom. In 2011, the Azerbaijani authorities carried out raids in some religious services, confiscated religious materials, and harassed and arrested members of Muslim and Christian communities.

In addition, religious groups face onerous demands by the government when registering. Registration process itself is a kind of lever that is used by the authorities of Azerbaijan against unwanted religious groups. The groups that operate without registration are harassed by the authorities, including fines and court cases which demand their closure, U.S. State Department report reads.

Azerbaijani Nazis ‘‘Sieg Heil’’ in Baku center, but police does not notice anything