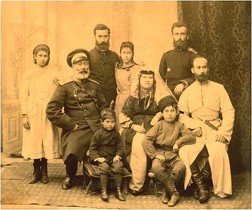 In Dagestan, not only families are considered as cells of society, but also the so-called tukhums - larger alliance of relatives consisting of several families.One such cell can include three to 15 families. It is a union of brothers, cousins, and in some cases, second cousins. A tukhum becomes more organized and cohesive, when the relatives start to cooperate in business or in government service.Even simple builders form groups and teams to hire to work. You can minimize the risk of being cheated by trusting relatives both in small and large business. In such tukhum competition, it is hard to succeed if you are on your own.

Since the early 1990s, the weakening of state institutions has led to einforcing of individual tukhums.For 25 years they have become powerful political unions. Clans include not only relatives and villagers, but also people from the same district. Such large clans control entire cities and regions, have their own business outside the republic, as well as lobbyists at the federal level. Without consent and taking into account the interests of these family-political unions, it is difficult to implement even a small business project. Investors will not be able to open a business without the consent of the head of the town or district. And it is possible to get it if there is a personal benefit. If the head of the district is not interested in the project, the business will not be allowed.Relatives and friends of mayors work in courts, tax and law enforcement.

The process of consolidation of political groups united by ethnicity and kinship is not ended. There are dozens of such unions in the republic, but there is no absolute dominance of any clan. The unhealthy competition worsens the investment climate and favors the spread of extremism. Competition is where it should not be present - in the public administration, in the struggle for control over major assets, but in the medium and small businesses competition is constantly restricted.

Moscow appoints the head of the region and heads of security agencies. But without the support of at least a few influential ruling alliances they are doomed to become kind of waxworks. In 2010, Magomed Abdullayev - intellectual, professional lawyer who had studied with Dmitry Medvedev in graduate school - was appointed Prime Minister. But Abdullaev did not have a large ruling tukhum.His relatives were engaged in beekeeping in a mountain village. Prior to his appointment, he was head of one of the departments in the government, and found the market for his family-beekeepers, offering natural honey to government officials, so the media nicknamed him Honey.

Abdullaev became the second person in Dagestan, with the support of Dmitry Medvedev.By unwritten order of distribution of three main positions, Magomed Abdullayev represented the largest ethnic group, the Avars.Yet in dealing with important issues, he was always pushed aside,

Obviously, the monopoly of clans inhibits economic development. It is unprofitable for investors to conclude shady corrupted deals.