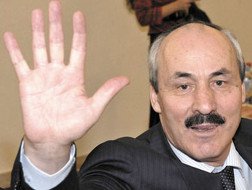 Competition between ruling ethnic-political clans continues in Dagestan, the largest and most multinational republic of the North Caucasus. Summing up the results of the last year, we should admit a weakening of the most powerful political alliances. Key players of the alliances were the former mayor of Makhachkala, Said Amirov, who is accused of grave offences and remains in prison at the moment; the head of the Dagestani Office of the Pension Fund, Sagid Murtazaliyev, the former president, Magomedsalam Magomedov, and the former vice-premier of the government, the arrested Magomedgusein Nasrutdinov.

However, the groups which were strong under Magomedov are trying to take power back, while those who used to be the opposition intend to stay in state bodies and claim free niches in the economy.

Major businessmen, natives of Dagestan, are involved in a competition for the main assets of economy – the Makhachkala sea port, Makhachkala airport, the Kizlyar cognac distillery. Among them are the senator of Dagestan, Suleiman Kerimov, and the head of the Summa Group, Ziyavudin Magomedov. Previously, the interests of the former head of the Resorts of the North Caucasus, Ahmed Bilalov, were represented there as well. At the moment he is wanted. The influence of the Moscow businessman Omar Murtazaliyev and MP Mamed Abasov is growing.

What does the struggle for power mean?

On September 8th, 2013, Ramazan Abdulatipov was elected the head of Dagestan. His term runs out in five years; and it seems that discussion of future candidates for the top position in the republic is senseless today. However, not everybody thinks so. In December the media began to make ratings of possible candidates, while Abdulatipov was criticized for hiring relatives, as if instead of forming a team the head of Dagestan had composed his own clan.

This is natural when ratings of candidates are made ahead of elections. But what is the point in ratings right after electing a new head? Few people believed in an early recognition of Magomedov, when candidates’ ratings began to be made after his election. But the mass media raise the question of whether the current head of the republic leaves before the end of his term and who will be his successor. And such discussions are a factor of instability in the region.

Ruslan Kurbanov: “Young believers turn into a serious force in the North Caucasus”