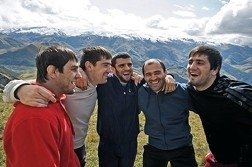 Since the start of the 1990s, the weakening of state institutions has strengthened certain clans in Dagestan. In 25 years, they have turned into powerful political unities.

Even Dagestani billionaires use the influence of local elites in order to realize projects. In 2009, billionaire Suleyman Kerimov failed to appoint his insider as the head of the Dagestani Directorate of the Federal Tax Service. The problem was resolved in Moscow, although the Moscow official was not even allowed into his office in Dagestan. Mukhu Aliyev, a man far from the authoritarian style of rule, was the President back then. Olympic Champion Sagid Murtazaliyev, currently the Head of the Dagestani Office of the Pension Fund, provided the taxman with the physical support.

The strongest unity is natives of the Levashinsky District. Magomedali Magomedov of Levashi headed the republic in 1990-2006. He was the Chairman of the Supreme Council of the DASSR until 1993 and then the Chairman of the Dagestani City Council, basically the Head of Dagestan. His son Magomedsalam Magomedov became the President of Dagestan in 2010 and resigned before the end of terms.

Another notable native of the Levashinsky District is Ilyas Umakhanov, Deputy Speaker of the Federation Council. His father Magomed-Salam Umakhanov was the First Secretary of the Dagestani Regional Committee of the CPSS in 1967-1983.

The Levashinsky political alliance split into several groups in the early 2000s when two of its leaders - Sayid Amirov and Sharapudin Musayev, Head of the Dagestani Office of the Pension Fund back then, rose to presidential ambitions. Amirov headed Makhachkala in 1998-2013. Before that, he was the Vice Prime Minister of Dagestan and formed his political party, probably the most influential one in the republic. Before the arrest, he was considered one of the most powerful people in the republic and beyond it. He did not conceal his desire to head the republic in every transition of the government, such as in 2006 and 2010. Yet, Moscow declined his candidature. Amirov was by elite special forces last year and taken to Moscow on a special plane. The Basmanny Court took the irreplaceable mayor in custody.

In the early 2000s, the ruling political alliance encountered opposition headed by Gaji Makhachev, leader of the Avar national movement. Opposition was then called the Northern Alliance. It united influential leaders from Burtunay (Kazbekovsky District): Saygipasha Umakhanov, Mayor of Khasavyurt, and Gaji Makhachev, Vice Prime Minister appointed in September 2013, recently killed in a car accident. The third leader of the Northern Alliance was an Avar from the Tsumadinsky District Sagid Murtazaliyev, Olympic Free-Wrestling Champion, Head of the Dagestani Office of the Pension Fund.

However, the Northern Alliance split too and its leaders formed separate political groups with their growing influence.