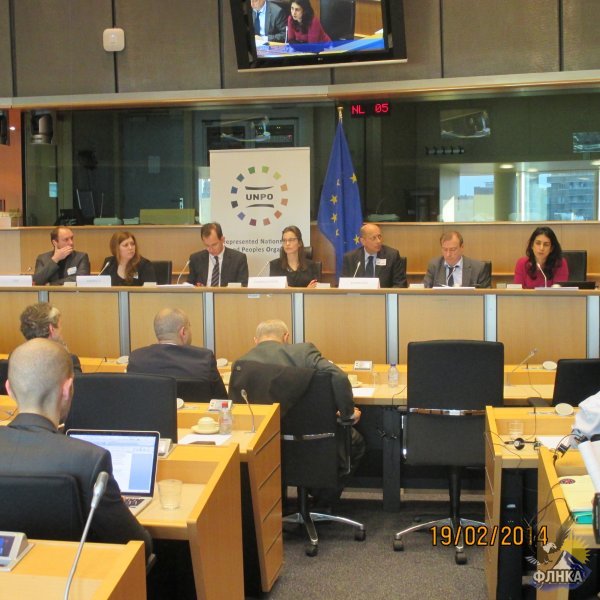 With the aim of initiating an open and constructive dialogue that could serve to explore ways forward for peaceful coexistence in the South Caucasus, Csaba Sógor MEP, in cooperation with The Unrepresented Nations and Peoples Organization (UNPO) and the National Talysh Movement, organised a conference entitled ‘Minority Rights, Reconciliation and Bottom-up Peacebuilding in the South Caucasus’. The conference took place at the European Parliament on 19 February 2014, and attracted an audience of European policy makers, diplomatic delegations, journalists and minority representatives.

Following the opening remarks of Csaba Sógor MEP and UNPO General Secretary, Marino Busdachin, the floor was given to Michel Ivor, Director at The Caucasus Interface. In his introduction to the conflict over Nagorno-Karabakh, Mr. Ivor stressed that the conflict is not merely about Nagorno-Karabakh, but also about seven occupied Azerbaijani territories. He suggested that as Nagorno-Karabakh is not involved in the current peace talks, a change in mind-set from the current ‘no peace is possible as long as Nagorno-Karabakh is not involved’ to an approach emphasising that ‘peace is possible with the involvement of Nagorno-Karabakh’, could be effective. The next panellist, Taline Papazian, Associate Researcher at the Centre for International Security and Defense Studies in Lyon, presented an assessment of the same conflict from a diplomatic point of view, touching upon recent developments in the peace process dictated by the OSCE Minsk Group. Dr. Papazian pointed out that finding a compromise on this conflict has always been difficult, but that three main principles serve as a basic agreement: peaceful settlement of the dispute, self-determination and territorial integrity, whereby the two latter depend on the former. Moreover, she noted that the importance given to Nagorno-Karabakh in Armenian foreign policy – as opposed to relations with the EU – has given Russia the opportunity to consolidate its influence in the South Caucasus region. Fargiya Kerimova, an international lawyer from a Talysh background, then gave an overview of the current situation facing the Talysh as citizens of Azerbaijan, stressing the imbalance between their dual role as duty bearers and right holders – the latter being nearly non-existent.

The second panel started off with an interesting comparison between Nagorno-Karabakh and the case of Flanders in Belgium by Dirk Rochtus, Professor at the Catholic University of Leuven. Dr. Rochtus suggested that Nagorno-Karabakh could draw lessons from the Flemish nation’s search for the most suitable kind of statehood for saving its identity; he presented the option of more autonomy (not meaning separatism), a solution similar to the Brussels model, as well the as the benefits that could be derived from a regional cooperative framework such as the Benelux. Up next was Alikram Hummatov, President of the National Talysh Movement, who outlined how the Talysh people feel and have been affected by the tensions in the South Caucasus. Stating that the conflicts plaguing the region are not about people but about politics, Mr. Hummatov asked the rhetorical question "why is the war necessary?” Last to take the floor was Nicolas Tavitian, independent consultant and EU affairs expert. Mr. Tavitian criticised the current inaction by the EU with regard to the Nagorno-Karabakh conflict, stressing that the EU should make better use of its soft power leverage, for instance by denouncing breaches of the ceasefire. He also noted that genuine confidence building projects have been far too timid, adding that minority rights could serve as a starting point.

The overall conclusion to be drawn from this conference is that denying the existence of problems, including violations of minority rights, will not contribute to overcoming the differences currently limiting the political, economic and societal potential of the South Caucasus. In this context, open and inclusive dialogue becomes a prerequisite for finding a peaceful solution to the conflict over Nagorno-Karabakh, and related tensions in the region. UNPO believes this conference was a step in the right direction, and looks forward to more constructive dialogue in the future.