In Azerbaijan online activists are still hounded after presidential election 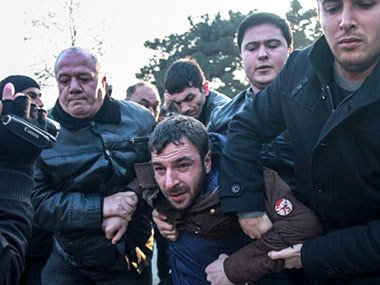 Many in Azerbaijan had entertained hopes that, following his re-election in late 2013, President Ilham Aliyev in Azerbaijan would ease repressive policies targeting free speech and the flow of information, especially on the Internet. Unfortunately, it is now clear such hopes were misplaced, reads the article published on the site of EurasiaNet organization.

The article notes that especially when it comes to Facebook, the Aliyev administration remains intent on keeping a tight lid on social media. By creating a climate of fear and intimidation surrounding social media use, the government seeks to compel most users to engage in self-censorship. And for those who won’t censor themselves, the government can manipulate the judicial system to stifle public scrutiny of its actions.

"The government’s crackdown on Facebook and other social media platforms began in earnest in 2011, when administration opponents used social media to organize street protests and anti-government public campaigns, inspired in part by the Arab Spring uprisings. Since then, dozens of online activists have been threatened, harassed or punished with harsh prison sentences while social media networks have come under stricter government scrutiny: Last year, the country’s rubber-stamp parliament approved legislation making defamation over the Internet, including opinions expressed on social media, a criminal offence punishable by prison terms of up to three years,” the article reads.

According to the article in the months leading up to Aliyev’s re-election in November of last year -- a vote widely seen as rigged -- authorities intensified their Internet crackdown. International rights watchdogs are paying particular attention these days to four criminal cases involving bloggers. The four -- Abdul Abilov, Omar Mammadov, Elvin Karimov and Elsever Mursalli -- are youth activists who administer well-known pro-opposition Facebook pages, each with several thousand followers.

"Authorities accused these online activists of narcotic possession, though no questions about narcotics were asked during their respective police interrogations, but only about their anti-governmental activities and the statements contained on their respective Facebook pages. None of those accused had a record of narcotics consumption, or even cigarette use. Human rights defenders contend that evidence against the defendants was planted and that the accusations them are politically motivated, designed to quash dissent.”

The Facebook page that Omar Mammadov, 19, administered offered regular criticism of the way the country’s leading state-controlled television channel covered events. Last year, Mammadov and members of his family were warned by security police to close down the Facebook page and cease anti-government political activity. In January, police confiscated his computer, and two days later, he was taken into custody by plainclothes policemen. He did not have a lawyer of his choosing present during questioning, and he was reportedly beaten up by police while in custody. In late January, a judge authorized 3 months of pre-trial detention, based on criminal charges of drug possession.

"Azerbaijan’s zero-tolerance policy for any form of dissent cannot be ignored by its international partners. As an accession commitment to the Council of Europe (CoE), Azerbaijan had undertaken to protect fundamental rights and freedoms, including "to guarantee freedom of expression and independence of media and journalists,” EurasiaNet writes. According to the author of the article Azerbaijan’s international partners should act decisively to insist on the immediate release of journalists and activists who are now behind bars for trying to exercise their right to free speech.