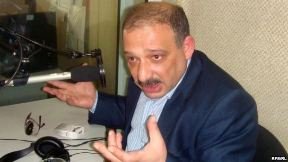 Rauf Mirqadirov, a commentator for the independent Russian-language daily "Zerkalo," was taken into custody by security personnel at Baku's Heydar Aliyev Airport on April 19 after being deported from Turkey, where he had lived with his family for the past three years.

Mirqadirov's lawyer, Faud Agayev, said on April 20 that the Prosecutor-General's Office was charging his client with state treason, specifically with espionage. Agayev added that Mirqadirov was being held at the detention center of the National Security Ministry and cannot be visited by lawyers until April 22.

According to Mirqadirov's wife, Adelya Babakhanova, Turkish police approached them on a bus in Ankara on April 18, claiming that Mirqadirov's residence and work permits had expired, although they had been extended until the end of the year. ("Zerkalo" says his accreditation was valid until September, but was revoked without explanation two weeks ago.) Mirqadirov was taken to a police station. Babakhanova was informed later the same day that her husband would be deported; the reasons were not specified.

Mirqadirov is a veteran commentator widely respected for his analysis of a wide range of issues, including Azerbaijan's relations with Russia and Turkey and the Nagorno-Karabakh conflict. His most recent published article analyzed Russia's recent moves in Ukraine, and their implications for the South Caucasus.

Emin Guseynov, who heads the Institute of War and Peace Reporting's Baku office, described him as "a well-known journalist with liberal views," who systematically criticizes human rights violations in Azerbaijan, Turkey, and elsewhere.

Prior to takeoff in Ankara, Mirqadirov reportedly telephoned a colleague, Zaur Bayramli, and told him that his problems with the Turkish authorities started immediately after the April 7 visit to Baku by Turkish Prime Minister Recep Tayyip Erdogan, whom Mirqadirov is said to have criticized on more than one occasion.

Bayramli is quoted as saying Mirqadirov believes Ankara acceded to a demand by the Azerbaijani authorities for his extradition, given that he had not written anything that might have offended the Turkish government.
But the website musavat.com reportedly quoted Elsever Agayev, the press secretary of the Azerbaijani Embassy in Ankara, as telling journalists that Baku played no part in Mirqadirov's deportation.

Mirqadirov is not the first Azerbaijani journalist to be deported from Turkey this year.

Makhir Zeynalov was expelled from Turkey in February after police accused him of an unspecified violation of the law.

Zeynalov contributed articles for the Turkish daily "Today's Zaman." He attributed his expulsion to his criticism of the Turkish government and of Prime Minister Erdogan personally.