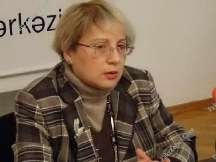 The Director of the Institute for Peace and Democracy (IPD ) Leila Yunus held June 2 an online press conference at which she responded to questions related to the criminal case against the journalist Rauf Mirkadirov and around the problems of people's diplomacy in the South Caucasus.

At the press conference organized by the Azerbaijani-Armenian website Public Dialogues (www.publicdialogues.info) Yunus was asked questions by journalists from Armenia, Azerbaijan and Georgia.

Yunus announced the contrived nature of the criminal proceedings against Mirkadirov, noting that though more than a month passed after his arrest, no investigation is conducted.

In her opinion, it is a criminal case is directed against the "independent people's diplomacy" and the final suppression of critical voices.

At the same time, she drew attention to the fact that the pressure on the Institute for Peace and Democracy (IPD ) is carried out both because of the "independent people's diplomacy" and active advocacy for human rights.

She recalled that the IPD is not the first time under pressure from the authorities.

In particular, in 2009 after the IPD conducted a study on the topic of human trafficking and reported the facts of involvement of police officers, Interior Minister Ramil Usubov filed a criminal complaint against her.

In 2011, after the IMD reported on the mass violation of property rights of citizens of Azerbaijan, the organization's office was demolished. It was privately owned by Yunus, but she has not received payment for it.

Asked about the state of health of the spouse of Yunus, Arif Yunusov, the activist reported that her husband on the night of April 29 after being unreasonably detained at the Baku airport suffered a hypertensive crisis. He has not fully recovered. Yunusov cannot continue his treatment because he unreasonably and unlawfully is not given money from his account at Unibank, said Yunus.

As regards the appointment of forensic evaluation of Yunusov, regarding his state of health and ability to give evidence to the investigation, Yunus said she does not trust the examination under the supervision of the prosecutor's office, "which denies even the facts of torture."

As noted Yunus, Yunusov is ready to testify in the presence of a doctor, who could immediately assist him if necessary.

Pressure on the pro-Western civil society activists and purpose of the arrest of Yunus herself, as she says, comes from a strong pro-Russian group in power. The U.S. and the EU do not fully appreciate the threat and encourage the authoritarian regime in Azerbaijan, said the human rights activist.

Speaking about the importance and benefits of "people's diplomacy," Yunus emphasized that although the prerogative of decision-making for conflict resolution belongs to those in power, "people's diplomacy" allows societies facing zombie propagation from their governments to obtain objective information about what is happening in the opposing countries and the events and processes there.

To this end, a joint project was launched by Public Dialogues (www.publicdialogues.info).

In the view of Yunus, the Azerbaijani authorities do not intend to stop "people's diplomacy", but want to put it under control, as well as other areas.

To this end, according to Yunus, the investigation calls civil society activists and subjects them to pressure.

Answering Turan's question of what is the reaction of the donor organizations supporting the project under the "people's diplomacy" to the arrest of Mirkadirov and whether they will continue to work in this direction, Yunus regretted that many international organizations express their concern at the harassment of activists and journalists only after they are sentenced in the court.

As for the future financing of projects "people's diplomacy," according to Yunus, she knows that the EU has allocated funds, but she has no information on what bodies specifically these funds will be allocated to.

On the question of the Armenian journalist on the harassment of ethnic minorities in Azerbaijan, Yunus said that in Azerbaijan nobody is persecuted on the basis of national origin and citizens are just punished because of their political views. She noted that of the 130 political prisoners on the lists of IPD 99 percent are Azerbaijanis.