Foreign Policy: Arrests of critics of Azerbaijani authorities have turned into ‘‘national pastime’’, while U.S. turn a blind eye 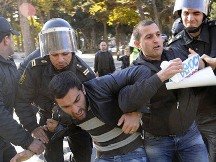 It is an irony that Barack Obama's administration has cut the U.S. budget for democracy promotion and has struck all manner of cynical bargains with kleptocratic authoritarian regimes such as Azerbaijani authorities, writes Michael Weiss in the U.S. edition of Foreign Policy.

On October 9, 2012, the American subsidiary of the State Oil Company of the Azerbaijan Republic (SOCAR) purchased a five-story mansion in the heart of Washington, D.C., for the purposes of "expanding its operations in the United States." Mansion's sale cost $12 million. For a time, its most famous lessee was Freedom House, the respected human rights monitor, which today counts Azerbaijan among the "not free" countries.

"I'm speechless," said Jennifer Windsor, the executive director of Freedom House. "I find it the highest form of irony that one of the world's least free countries is now occupying what was the house of freedom."

It reads that it has poured millions of dollars into the caviar diplomacy, top-drawer U.S. lobbying, consultancy, and PR firms to pushing forward the pro-Azerbaijani articles in American media, organizing trips for the British MPs and other officials in Baku, making friends with the MPs at the Parliamentary Assembly of the Council of Europe .

The lobby's true purpose is to send a message back to Azerbaijan that there is nothing that can be done to remove this ruling regime from power," said Elmar Chakhtakhtinski, chair of Azerbaijani-Americans for Democracy (AZAD).

The State Department's human rights report for Azerbaijan found in 2013 that there were "increased restrictions on freedoms of expression, assembly, and association, including intimidation, arrest, and use of force against journalists, the article reads.

According to Rebecca Vincent, a former U.S. diplomat and a human rights activist, the authorities have instituted a "climate of fear" in a country that has seen its number of political prisoners jump from 65 in January 2013 to "nearly 100 cases." According to the article, the Institute for Peace and Democracy puts the figure at 130. As Weiss notes it is something of a national pastime in Azerbaijan that critics of the ruling regime end up being accused of crimes themselves, and locked away in prisons.

According to the article in 2013, Transparency International's Corruption Perceptions Index rated Azerbaijan 127 out of 177 countries -- on equal footing with Russia. According to Rebecca Vincent something that foreign investors should definitely be aware of is the lack of rule of law in the country. "If you had to take something to a national court, you couldn't have a reasonable expectation to receive due process and a fair trial.”

The 1938 Foreign Agents Registration Act (FARA) forces any companies based in the United States to report on money they have received from foreign governments. Studying the U.S. Justice Department records related to Azerbaijan, one can find many law companies, PR agencies and consulting companies paid by Azerbaijan.

For instance the Podesta Group, a D.C.-based lobbying and public relations outfit on January 1, 2014 inked a new agreement to receive $50,000 a month from the embassy, plus expenses to provide "strategic counsel to Azerbaijan on strengthening its ties to the United States government and institutions." Foreign Policy contacted the Podesta Group for comment about the nature of its contract with the embassy. No one ever responded them.

Roberti+White LLC, based in Washington and New York, received $20,834 per month for six months -- $125,000 in total -- from SOCAR USA in exchange for offering "strategic counsel" to the state oil company to "strengthen its ties to the United States government and institutions," the article reads.

The Azerbaijan American Alliance (AAA) the current chairman of which is Dan Burton paid Fabiani & Company $2.4 million for "planning and executing strategies to encourage research and advocacy about the Azeri people, country, culture and international relations." In the six months prior to May 31, 2013, Fabiani & Company received over $800,000 from the AAA and incurred expenses in excess of $664,000, including for advertising in the Washington Post and Express newspapers. FP reminds that AAA was founded by Anar Mammadov. According to the article Azerbaijan conducts active lobbing also in Europe, in the UK in particular.

According to the author of the article the Baku lobbying efforts try to minimize the activities of the Azerbaijani opposition forces abroad. "Given that they only structures related to the Azerbaijani embassy communicate with Washington, should we be surprised that the building which was once rented by the human rights organization, is now owned by the Azerbaijani oil company?" Weiss wonders.

He also notes that, apparently, the Obama administration does not consider human rights issues a priority.

The Caspian regime manages to convince the West of its legitimacy by the help of big money. "The tragedy is in fact that it seems as if nobody cares," the author concludes.