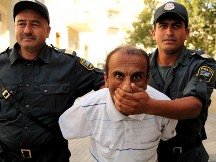 Azerbaijan continues violating the human rights. Despite this, the country will continue to try to buy respectability. In June of the following year Baku will hold the first "European games." In fact, Azerbaijan is made of facades of modernity, wealth, progress, and "democracy" that hide the inner ugliness. This is stated in the article written by Patrick Reidy, published on the website of the international human rights organization "Index on Censorship”.
On 5 September, Azerbaijaini president Ilham Aliyev addressed the Nato summit at the Celtic Manor golf resort in Newport, Wales. It was an unspectacular speech from an unspectacular autocrat. As he often does, he talked about the amount of money Azerbaijan was spending abroad, Azerbaijan’s rapid economic development, Azerbaijan’s role as a bridge between east and west, and Azerbaijan’s continuing dispute with Armenia.
As noted in the article the dispute between the two countries over the territory of Nagorno Karabakh, started since the break-up of the Soviet Union. In 1994, on the initiative of Russia, the parties signed a truce, but the territory remained a "hot spot", where periodically the tension increases. The situation in the Nagorno Karabakh conflict has escalated this summer. A few weeks after that skirmish, and just before his Nato address, Aliyev met recently-elected president (formerly prime minister) Recep Tayyip Erdogan of Turkey.
"Turkey has always pursued an open policy on the issue of the Armenian-Azerbaijani conflict over Nagorno-Karabakh, has always stood by Azerbaijan, stood by truth, justice and international law. Turkey and Azerbaijan work in a coordinated manner to dispel the myth of the "Armenian genocide" in the world,” he wrote in his twitter.
As noted in the material that Erdogan did not seem to mention any discussion of the Armenian genocide in his press briefing after the meeting. "In fact, the Turkish president has been perceived as attempting to soften the Turkish state’s hardline denial of the incidents of 1915. So why would Aliyev raise the genocide issue this month? Perhaps he is nervous that Turkey, a major ally in the Nagorno-Karabakh dispute, is going soft on Armenia. This year’s detente between Turkey and Armenia continued when Armenia’s foreign minister Eduard Nalbandian attended Erdogan’s presidential inauguration at the end of August,” the author writes.
In April, on the 99th anniversary of the beginning of the ethnic cleansing of Armenians, Erdogan released a statement saying: "Millions of people of all religions and ethnicities lost their lives in the first world war. Having experienced events which had inhumane consequences – such as relocation – during the first world war should not prevent Turks and Armenians from establishing compassion and mutually humane attitudes towards one another.”
"Nalbandian, in return, formally offered Erdogan an invitation to Armenia’s genocide commemorations next year, repeating an invitation first extended a few months ago by the country’s president Serzh Sargsyan. Any newfound good relations between Armenia and Turkey would severely weaken Azerbaijan’s territorial argument, or more accurately, weaken its ability to make the argument forcefully in the international arena,” the author believes.