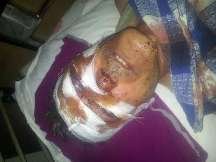 On September 22, a human rights activist  Ilgar Nasibov  who was brutally beaten on August 21, was formally charged under Article 127.1 (intentional infliction of less serious health damage), and was  transfer under police surveillance.

This measure prohibits departure from the place of residence, and requires  regular police registration. At the same time, the police  can come  to his apartment and check Nasibov.

"I  rejected a lawyer and  I will myself  defend me. At some  stage we will be able to invite a lawyer from Baku," said Nasibov.

During the confrontation on Monday, one of the attackers  on Nasibov,  Farid Asgerov, perjured saying that Nasibov inflicted bodily injury.

"I was seriously injured, and the recovery process will be long. I lost two liters of blood, dizziness continue,  and my face remains numb. I need a serious and long-term treatment. Under  such situation, the nomination of trumped-up charges against me is a torture, " said Nasibov. He believes that in the next few days the case will be sent to court.

Nasibov was beaten by Askerov and others on August 21 in the office of the Resource Centre for Development of NGOs and democracy in Nakhchivan.

Despite severe injuries, multiple fractures and a partial  damage of his vision, the police only on September 4,  filed a  lawsuit. Nasibov was found as a victim, but the case was filed under "intentional infliction of minor bodily harm."

Many international organizations  demanded to investigate and punish the perpetrators and  those who ordered  the attack. The last time it was voiced in the resolution of the European Parliament on 18 September.

After all this, the police Nakhchivan  accused Ilgar Nasibov  of beating Askerov.