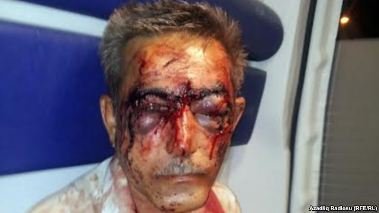 An Azerbaijani journalist and rights activist has been badly beaten by unknown assailants in the country's Naxcivan exclave.

Ilgar Nasibov was attacked late on August 21 while he was in the office of the Naxcivan Resource Center, the only independent rights organization operating in the province.

A photograph of Nasibov after the attack shows his eyes swollen shut from the beating.

OSCE Representative on Freedom of the Media Dunja Mijatovic said that "this criminal act has an enormous chilling effect on free expression and free media" and she urged the Azerbaijani authorities to bring Nasibov's attackers to justice.

International rights groups have been complaining about a crackdown by Azerbaijani authorities on rights activists.

Four of the leading activists in the country have been detained and charged with serious crimes in recent weeks.